Hold onto your paddle; the world's up shit creek

Well, that is if you can still paddle up frozen rivers. If this story about global cooling is to believed, you might need more than just a sturdy paddle. A balaclava too perhaps. And a holiday home on the equator.

(As I write this, it seems like someone at Google has really messed up (never type ‘google’ into Google by the way)… every site on the Internet is harmful to your computer apparently, ut oh… THE INTERNET MIGHT HARM YOUR COMPUTER! I think someone’s going to get fired for breaking Google… Edit: they fixed it!) 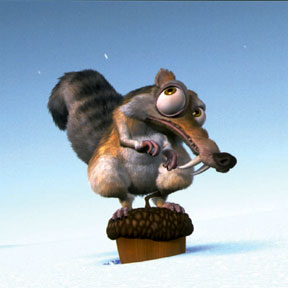 Soon, the world will be covered with animals that look like this.

I consider myself fairly well-read on the topic of global warming (or lack thereof). I’ve seen all of the relevant propaganda (An Inconvenient Truth, Zeitgest, and a bunch of other ‘conspiracy theory’ documentaries), I’ve read reports, I’ve studied the opinions of experts. I had this fantastic friend (another WoW guild mate) who was a real-life, bonafide, honest-to-God (well, if God existed, which is folly, according to my friend who knows the answer to everything) conspiracy theorist. He believes in the Illuminati; and that 9/11 was a complete set-up by the American government. He had some very interesting views… and is no longer in my guild…

Anyway, I do have him to thank for one thing: my interest in media hype in general, and global warming in particular. I’m a scientist, so I’ve always taken a fairly pragmatic look at things like global warming. It’s always amazed me that people took such a VAST claim as truth, just because of a complete media blitz. I don’t think anything else in the world has ever received as much ‘bad’ press as global warming.

Pretty funny, then, that it turns out the world is getting colder. Sure, it’s just one article, and I’m certain there’ll be other stories written in rebuttle citing their own sympathetic professors, but let’s face it – the numbers are the numbers. Humans might be having an effect on the environment, but we’re such a tiny drop in the massive ocean of factors that effect our planet’s climate. Its ludicrous to think that our tiny actions down here on our sweet green pastures have anywhere near the same effect as the rumblings and stirrings of a celestial body that’s 109 times larger than us. Really. People should take a look at the sheer SCALE of the universe, and just how insignificant our actions down here really are. That creek’s still going to drag you downstream, no matter how hard you paddle and flail around.

Anyway, for other reasons — the quality of our air, if nothing else — we really should probably think about being more energy efficient. I’m sure you’ve all heard about how much energy the USA uses, compared to other nations. Then there’s all the cars and other machines gorging on oil-based fuels. I’m not going to say everyone should turn-face tomorrow and drive electric cars, and heat their houses with geothermal energy, but it might make sense to start converting! (Check this car out  if you’re interested in ‘zero-emission’ cars — certainly makes me think about electric-powered cars more seriously…)

Having said that, maybe we’ll soon have to produce tons and tons of greenhouse gasses to drive ourselves out of an impending ice age. Hm.

While we’re on the topic of the world, I thought this was a fun little story about how the recession effects one of the most stalwart and recession-proof sanitary products: toilet paper. I wish I was making it up, but it seems toilet paper sales in the USA have dropped 5% in the last quarter. This actually hints, whether you like it or not,  that people are eating less food than they were 3 months ago (which is even more surprising, considering Thanksgiving and Christmas were both last quarter).

Oh, and finally, the ‘cute Welsh girl’ (you’d know if you’d listened to my Chest Pains podcast) showed me a YouTube clip which shows there might be hope yet for Mango my crippled feline companion– a wheelchair for your pet dog or cat:

It's Sunday, and the blogosphere is asleep…

Though a Jew, Sunday is now my sabbath

With apologies to the Queen and to Scotland...
The Irish Monologue