After poking at the fairer sex yesterday, I felt it only fair that I poke fun at the hairy and muscly hunter-gatherers today. Have you ever heard of Manorexia? It’s one of those awful portmanteau phrases, like ‘manboobs’ (or moobs) where you can kind of tack ‘man’ at the beginning and turn it into something that’s altogether slightly more… sinister. ‘Manflu’ is worse than normal flu, apparently. Anything to make men sound more rugged and manly, eh?

The media love such phrases (like TomKat or or Brangelina) — I try to shy away from them, unless I’m using the word ‘Spanglish’ or ‘Engrish’ (OK, so that’s not portmanteau, but it’s still an amazing language)

Anyway! Manorexia is no laughing matter. An article today by a popular British daily paper highlights just how prevalent this issue might be — 31% of the women surveyed said they thought their boyfriend/spouse/partner might be suffering from an eating condition. That sounds remarkably high to me, and it was probably a yuppie demographic that was surveyed, but even so — that’s a lot of skinny men!

I guess it’s only inevitable that peer/public pressure would finally apply to men as much as women. For hundreds of years women have answered to a different set of public rules and expectations — they’ve had to diet, paint themselves with make-up, wear corsets, rear children… While men haven’t really been forced to do anything. Just make money, I guess. Now with sexual equality comes issues such as manorexia!

Even I’ve lost a a lot of weight in the past year or two, but I don’t think I’d go as far to call myself skinny. Aerodynamic, maybe.

Now I have to segue neatly onto who killed Montgomery Billingham, the unfortunate victim in my interactive murder mystery audio adventure (IMMAA, if you wish). How better to do this, than a horrible story of a guy that had his jail sentence reduced… because he’s too fat. I kid you not — this heaving heffalump bashed a guy half to death with a baseball bat; but because he has obeseity-related illnesses (‘diabetes, angina, incontinence, septicemia, tumours and ulcers’), the judge decided to cut his sentence from 4 years, to just 15 months. Madness! 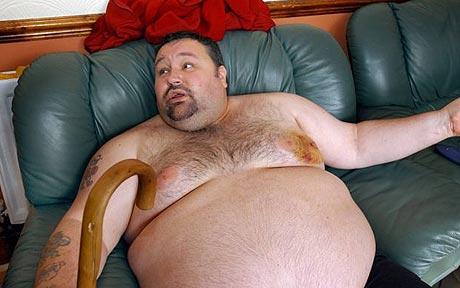 So, Montgomery Billingham, president of Billingham Plastics Company (who is neither obese or anorexic, but ‘slightly portly’), is the unfortunate millionaire victim in my story ‘Who Killed Montgomery Billingham?’ which begins at the end of this blog entry! Bear in mind this is just an introduction, so there are no wild choices to be made. A groundwork must be laid, characters must be defined, and my characters’ voices must be practiced until I’m confident enough, as the story unfolds, to do the characters justice.

The plan is to do a chapter (or episode) every few days. They might more frequent when the choices made by you, the listeners, result in more… instant results for our protagonist (who has a bit of a fey accent, truth be told). Please click play (or subscribe on iTunes), vote, and let me know if you enjoyed it!