Oh wait, that was me, on my own, walking into a cave-bar in Cappadocia, Turkey.

Cappadocia is utterly unique in its geology and geography; so fantastically unique that a bar in a cave is nothing special. It’s often referred to as a ‘moonscape’ purely because it looks so other-worldly.

Before you an appreciate the oddness of the landscape, you need to know how it was formed. The area was once volcanic, and over thousands of years massive amounts of volcanic ash were deposited. Finally there was a huge eruption that covered most of the area in hard, metamorphic rock (like basalt or onyx). Since then, the mountains of ash and rock have been eroded to form quite unique and stunning formations, like the Penis Valley. 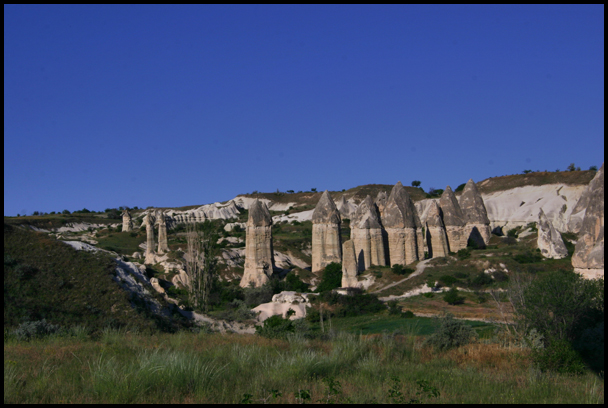 It’s actually been renamed ‘Love Valley’ in recent years — damn local tourist board! — but it quite clearly shows you just how weird Cappadocia looks. Newlyweds are meant to stay the night at the foot of the giant penises as some kind of fertility ritual. I’m not sure if ‘modern’ couples do it, or just the cave-dwelling types.

And so we’re finally back to the topic of caves and troglodytes again.

This continues on from my stories of Istanbul and Antalya, and I suggest you read both for some backstory, some history of Turkey, and some pretty photos.

Flying into Cappadocia I was greeted with a fantastic view; I was also greeted with the shortest runway I’ve ever seen. We were in a large, commercial jet (200 seats), and somehow our pilot was going to squeeze this thing onto a runway about a mile long. Obviously we made it, or I wouldn’t be here now, but it was mighty close. The airport itself was more of a warehouse, with a rusty corrugated iron roof. Bag reclaim was… well… it’s hard to explain just how much of a joke it was. But I’ll try.

We were on the tarmac having just disembarked, watching our bags being unloaded. About 20 feet away was the entrance to the terminal, and an ominous looking hole in the wall with a plastic curtain dangling down to cover it. We walked through some double doors, and to our right was a conveyer belt about 10 foot long. About 100 of us were in this tiny reclaim room — it can’t have been more than a few meters across — waiting for our bags to arrive. And sure enough, the bags arrive, pushed through the plastic curtain onto a static conveyer belt. Obviously the motor that drove the belt no longer worked. The bags quickly began to pile up, until all 100 of us lurched forward into the messy morass of bags, hunting eagerly for our possessions.

I finally escaped the fracas, and the airport, to find my cave hotel pick-up waiting. We made quick progress to Urgup, one of the few towns in central Cappadocia. As we drove, the landscape became more and more… penile. Finally, after driving up a few steep inclines, I arrived at my base of operations for the next few days — a cave. It was a very nice cave, with a bed, a shower and even electricity, but it was still a cave that had been carved into the ancient volcanic ash by special cave crafting troglodytes. Just kidding about the troglodytes bit — but there are specialised cave makers in Cappadocia! 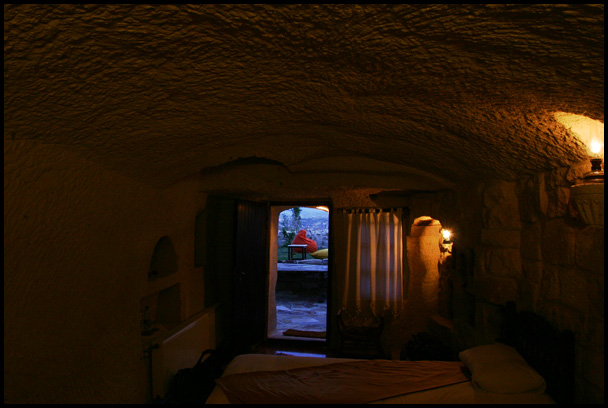 The entire area is literally covered with caves that have been carved out of the soft, volcanic pummice. Until the 1970s the caves were actively populated, until the government finally deemed them unsafe for living in (something about cave ins killing some poor nomadic hippies). Nowadays you can’t technically live in a cave, but through some loophole, if the cave is attached to a normal dwelling, it’s OK! As a result, you can stay in a handful of cave hotels in the region. It was quite a unique experience; made even more so by the fact that I had wireless internet, a comfy bed and then, when I looked up, I could see proof that I was living in a cave that had been lovingly hand-crafted, perhaps thousands of years ago.

The highlight of my trip to Cappadocia, and the main reason I’d flown 2 hours to central Turkey, was for an at-dawn hot air balloon flight over this volcanic Turkish moonscape. I set my alarm for 4am and prayed I’d be awake and ready for a 4:30am pick-up. Before I knew it, we were driving across the backroads and rough-hewn mountainside looking for a good place to take off from. 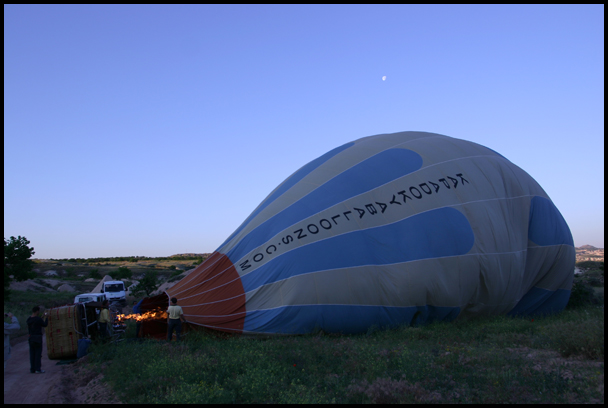 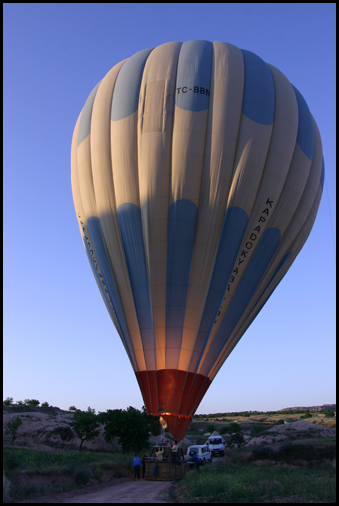 I’m not going to ply you with thousands of photos taken high in the sky (you can view lots of them in the Turkey gallery), but I’ll give you one of my favourites. Our balloon was being piloted by Lars, one of the most experienced balloonists in the world. Apparently he had more total hours in the air than anyone else in the region, possibly the world, and he liked to prove it by dipping into valleys, jetting along, not more than 6 inches from the mountainside, and then lifting quickly out with a thrust from the massive burners above us. We’d quickly ascend thousands of feet and  look down at where we’d just been.

If you look at some of the photos in the Turkey gallery you can see this valley far below the balloon. Quite a thrill, I assure you, especially during the rapid ascents, and definitely one of the highlights of my short-but-eventful life.

Lars ended the amazing flight by landing the balloon on a trailer the same size as the basket. I kid you not: he landed it on a trailer about 2 meters long and 1.5 meters wide. What a hero!

That concludes this entry, but next time I will talk about the other important factor of Cappadocia’s history: its ancient civilisations of cave-dwellers and their churches. In their caves you can find sites of Christian religious significance dating back to 300AD — the oldest remaining sites in the world.

Some photos from around the world
Thoughts from a happy childhood