Burning the midnight, er, 4am oil…

I really ought to sleep, but you know how it is when you’re in the middle of something and you just want to FINISH IT.

I was working on updating my ‘About’ page, which is basically just a chance to tell the world a little bit about me. Or for lazy people to read without catching up on the thousands of blog entries that I will eventually write. Or those voyeuristic types that are watch and learn, but don’t want to be seen.

I bashed that page out in about 30 minutes, and then I had this hair-brained idea to whack a bunch of photos of me into a single block — a collage, if you will — of photographic loveliness (you can click it if you want to see it in more detail… I’m not sure why you would want to, but the possibility is there if you so desire):

I appreciate that some of the pictures aren’t aligned perfectly, and there are some jagged edges, and it could’ve been a whole lot better arranged… but right now it’s 4am, I’ve been up 18 hours, so it’ll just have to do!

Just before I sleep, I want to share this cute little link with you, as it’s rather fitting, after publishing the Australian penis monologue. In Australia, a man has recently been caught… smuggling pigeons into the country. It’s another case where I kind of wish I was making it up; but it is sadly not so. This guy shoved two poor pidgeons into padded envelopes and then slid them into a pair of tights, which he was wearing under his normal clothing. 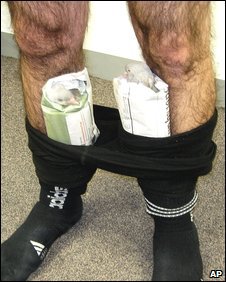 Jesus, look at those hairy legs.

But get this, the tale gets even more weird: custom officials also seized two eggs, some seeds and an ‘undeclared aubergine’. Holy shit, this guy is a not only a danger to himself but to all man kind!

We're camping… but we have no tent

Throw another shrimp on the barbie
Playing online games in Serbia is serious business; it can get you killed!