(This follows on from my eventful stay in Istanbul — you can read part 1 or part 2 of my Istanbul story, if you want to ‘catch up’! There are photos in this story, towards the end.)

After a 3 day stay in Istanbul I said goodbye to the creepy carpet salesmen, the beautiful mosques and ankle-breaking cobbles (Rome was worse on the cobble-front, but only just). I jumped on a rather large commercial jet down to Antalya, the beach tourism capital of Turkey — Istanbul has the culture, and Antalya has the mile-long golden beaches and 18-30 clubs. Just a slight change from its role as naval base for Pergamon back in 150BC.

I didn’t see much of the beaches, mind. I was too busy exploring the lovely ‘old city’ of Antalya (called Kaleici) which was a lot more exciting than the over-developed touristy strip that ran the length of the beach (and thus the entire city). It was on the way back to lovely hotel (some kind of huge, converted barn), from the old city, that I took a shortcut through the ghetto.

I didn’t know it was the ghetto at the time, obviously. You see, I have a very good built-in compass. I can run around a very busy city all day and then work out which side-road I can take to ‘cut the corner’ back to my hotel. It’s a great ability, and it’s saved me a lot of time during my travels. It’s also led me into some interesting places… like the Antalya Ghetto. I think the first hint was the smell; the smell hit my senses like hammer. Hoping to ‘push through’ this entirely new and unpleasant smell, I started to descend into some kind of subway (I have no idea why in hindsight, but it was in the right direction, so…)

I reached the bottom of the stairs and looked around.

Now, I’m sure most of you will agree that pet stores are fairly cruel to the animals. It can’t be fun for the animals, caged up day after day, awaiting some kind soul to buy them. I tell you, pet stores had nothing on this underground pit of animal depravity. I’d found the source of the smell; hell, I’d hit the mother lode of all disgusting smells — pet shop after pet shop. In what was obviously some kind of shopping mall 10 or 15 years ago, there was now about ten (10!) shops peddling poorly nourished pets. This was pet central for Antalya, I guess. I won’t go into too much detail, as it’s probably fairly upsetting to read about, but let’s just say that you shouldn’t put 10 rabbits in a meter-square cage. And not clean it out for a week.

Moving on from the Petshop Promenade of Doom… the highlight of my stay in Antalya was undoubtedly my trip to Thermessos (historically Termessos), the unsurmountable and unconquerable Pisidian city that sits a mile up the mountain of Solymos (it’s actually in the Taurus Mountains, which I didn’t know until now — that’s my star sign!). Because of its location (at the top of a damn mountain), and because Alexander the Great decided that it wasn’t worth the effort, it’s now one of the finest-preserved ancient cities in the world.

About half way into the climb up the side of the treacherous rocky mountainside, a path strewn with sharp-as-glass ancient marble chips, I began to realise why Alexander gave up. It was that kind of wise decision that probably let him conquer and rule the expansive Macedon empire.

Being less-wise than the Great, I continued to pick my way up the path. I knew I was getting close when I started walking over meter-thick chunks of marble that were once the outer city walls. It was rather odd climbing up steps made of the crumbled remains of a 2500 year old city. I knew now why the guy at the ticket office (you have to pay about 1 euro to be allowed onto this highly touristic mountain climb of death) took one look at my tarantulan legs and said in broken English ‘They will be useful!’

I finally crested the last few meters of the climb and was rewarded with a staggering view over the valley below the mountain.

The photo shows what much of the run-down city was like: nature meets ancient civilisation. The past 2500 years have left the city in pretty bad shape, with all sorts of rare plant species growing through and around ancient temples of Zeus and Artemis. It was pretty spooky walking around an ancient city, not a sound to be heard except for the chirp of crickets. I didn’t see a single person for my entire stay… in June! 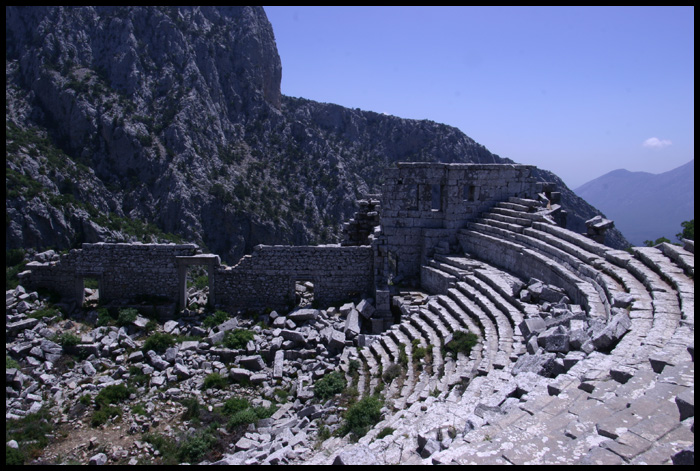 I think my favourite moment was standing at the focus of a 5,000-seat theatre and singing at the top of my lungs. Well, more like shouting. For a brief moment I was transported back in time, to a time when great Greek orators and philosophers such as Demosthenes or Plato ruled the roost and enlightened people the world over hung onto their words. For a moment, standing there, I was one too! Hopefully I wasn’t just experiencing the past; hopefully it was more of an omen of things to come.

I’m afraid there’s no cliff-hanger to this little story, I just wanted to talk about my exploration of Thermessos. The next story is a whole lot more exciting though, as I decided to venture into a rather deep cave, a mile up another mountain and about 10 miles from the nearest town. Obviously I didn’t die or anything, or I wouldn’t be here to tell the tale… but it was a close call. My bones almost joined those of our ancestors that made their home in the caves of Karain 200,000 years ago!

And so there I was, in the Grand Bazaar…

Oops, I broke the RSS feed a bit...
Exploring the cave of Karain, or how I almost met my maker