Life as a World of Warcraft guild leader

It’s February 2009 and World of Warcraft now has 11.5 million players worldwide. It has more players than any other MMORPG (Massively Multiplayer Online Roleplaying Game) in history by a considerable margin; it’s simply blown the competition of the water. The growth of WoW is quite literally unprecedented. 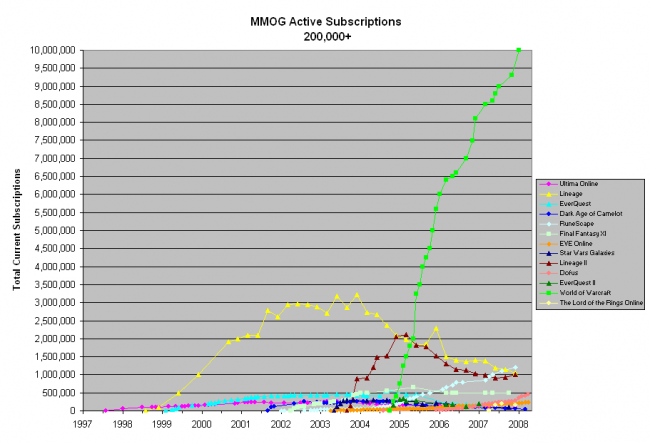 And that’s just up to some time in 2008. WoW has taken huge bites out of other gaming segments; when you are the third biggest selling PC game of all time (behind Sims 1 and 2 — damn those female gamers!), other genres tend to take a hit. Blizzard didn’t just conjure 11.5 million people out of thin air! People dumped their FPSes and RTSes and came to see what all the fuss was about. I remember when I started playing, the majority of people that I met were CS kiddies, or StarCraft/Warcraft 3 players. You can see from the graph that there just weren’t that many subscribers from other games to play WoW — Blizzard had done what every other games developer can only dream of: they cracked the MMO subscription market wide-open.

Blizzard made fantastic use of their experience from StarCraft and Warcraft, and made a game that’s easy to learn and enjoyable to play. A lot of the ‘old school treadmills’ and ‘grinds’ that players had grown to be accustomed to (and often loathe) in other MMOs all but disappeared in WoW. If you’re one of the million-or-so gamers that came from EverQuest, Dark Age of Camelot or Final Fantasy XI, the first thing that strikes you about WoW is just how easy it is. Never has it been so easy to be ‘successful’ in an online game. When it come sto games like minecraft, you can find Minecraft server list here to make the game more interesting by checking out other options.

You might’ve heard the phrase ‘welfare epics’, or ‘casual friendly’. Both of these terms have been coined to describe Blizzard’s ideology of massively-multiplayer online gaming along with overwatch hacks: It should not necessarily be about how much you play, it’s about taking part. WoW is about making everyone feel special. And boy it works!

In other games, before WoW, you could only dream of one day being in anyway equal to the best players. MMORPGs really weren’t for casual gamers, they were for gamers that thought they had a chance of being #1. They had the time, the dedication and a certain lack of RL obligations — that’s what it took to be competitive pre-WoW.

Then along came the casual-friendly welfare-epic gloriously lore-rich realm of Azeroth. A world where you could attain the max level is about 15 days, and be adequately well-geared within 20. Such an easy game had never been heard of! All those newbies were subscribing after their free month. An awful lot of people never play past the first month of MMOs — WoW’s player retention is truly awesome compared to other MMOs; people pick up the game, and never put it down. Finally we had a game where the reward is directly related to the effort, and not some sick-and-twisted system where the higher levels require exponential time investments and dedication.

And that’s the key to WoW: a linear curve of progression. There is very little justifying reason to play those extra 25 hours a week to get that small one-up on the opposition. (There’s a very good business reason for this too, as Blizzard make more money if you play less!)

Anyway, you can probably see where this is going. I’m not one of those casuals; I’m the total opposite. I’m a guild leader. I’m in that tiny percentile of players that goes a little bit further than the rest. Not only do I play those extra 25 hours a week, I also manage a guild at the same time.

The purpose of this blog is to educate and inform people about massively multiplayer games in general, and leading a successful WoW guild in particular. If you’re a struggling guild leader, or you’re thinking about starting your own guild, hopefully you’ll be able to find some tips here. Perhaps you’re just a raider, with no involvement with the leadership of your guild, you might find some interesting things about inter-guild politics, or how to be a better raider.

There’s actually very little out there on the Internet about actually leading a successful WoW guild. That’s probably because we’re overshadowed by our hyper-competitive PVP brethren, like Serennia and Ming. Hopefully this blog will give you an insight into the other, more social side of online gaming: guilds and PVE.

Are Blizzard the new Microsoft? Is Warcraft the new Windows?

For those geeky brothers and sisters of mine...
This is my life...