Or if not killed, at least seriously injured with a baseball bat.

So there I was in Beograd — Belgrade –  capital of Serbia. Hopefully you’ve read my little introduction to Serbia; the backdrop has been painted for the retelling of one of my little escapades.

I’m not ashamed to say that the main reason I went to Serbia was to meet some of my World of Warcraft guild mates. Actually, as guild leader, I guess they were my peons, but carrying over that kind of relationship from online to offline can often result in horrible consequences: so I treated them like equals. It was a little weird being treated like some kind of leader in real life though, I have to admit. That slight element of deference, that instantaneous silence if I start talking over someone else.

Anyway, when I wasn’t in my hotel (a 3 star hotel in Belgrade is a bed and a sink, by the way — I think the cleanliness of the sheets dictates the star rating), or at Petar’s house, hitting on his younger cousin, my home was the dark and dingy subway beneath one of the main junctions in Belgrade. When I was being taken there for the first time, I wasn’t really sure what to make of it. ‘Just a little further down here, Dell.’ (Dell being a shortening of Delling, my nickname — being called by your online persona in real life is cool and kinda weird at the same time). Stepping down broken enamel steps, further and further, sunlight disappearing behind me, I emerged into… the seedy online underworld of Belgrade. Once it was probably a shopping mall of some kind, but now it was a scattering of white-painted-window derelict shops, and… internet cafes! Lots and lots of internet cafes. Basically, everyone that plays WoW in Serbia plays from this little hub.

There are cafes there for every kind of player: the posh cafe with cute Slavic wenches that walk around and bring you drinks, the middle-of-the-range ones that are clean and functional, and finally the dingy shitholes that, of course, I would end up playing from for a week. Apparently my guild mates picked that one because it was ‘cheap and cheerful’. Yeah, cheap like a bunch of ancient 486s with 14″ CRT screens, and cheerful in that they played awful happy hardcore music. Admittedly they turned the music off after a few days of me whining, which was good of them. 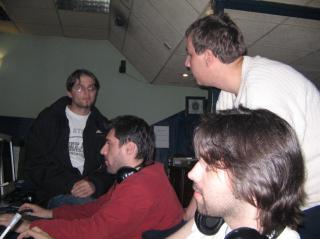 You can’t see much from the picture, but I couldn’t find the better one… if I track it down, I’ll post it.

Online gaming is a highly-competitive arena. You might’ve heard of the Chinese guy that got stabbed to death after he sold a ‘dragon sabre’ that belonged to someone else (the murderer). There have been lots of reported cases of real life brutality in Korea too, caused by online disputes that have sprawled into a real life brawl. While gamers in Europe are not quite as passionate as our Far Eastern brethren, some of the… ‘less developed’ Slavic friends still take gaming very, very seriously. Steal his loots, and he’ll threaten to break your legs with a baseball bat. Steal an important player from his guild, and he’ll threaten to track you down and break your neck.

This was never much of a problem, as I was all the way over in England. I just laughed and shrugged off their threats. Unfortunately, I was now in Serbia, and those over-excited, evil Serbs that were threatening me and my family were just around the corner in the next internet cafe. I’d conveniently forgotten this before I’d jumped on a plane and flown into a dangerous climate where I would have to constantly alert for impending attacks.

Belgrade under a full moon -- that's the Sveti Sava church

So, there I was, trying to lead a raid, shouting into a microphone, trying to desperately to be heard over some particuarly tragic hiphop music (did I mention you can hardly see the screens because everyone’s smoking too?), when suddenly a large, buff, muscular Slavic Schwarzenegger-lookalike is silhouetted in the doorway to our internet cafe. He’s wielding a baseball bat menancingly, a malevolent glint in his eye.

At this point, I wish all of my loyal guildmates stood up and said ‘I’m Delling!’, ‘No, I’m Delling!’, but sadly I don’t think Spartacus is a very popular film there. Instead, they all stood up, very menacingly and started walking towards the spastic Serbian that was busy spouting death threats and still looking for me. They surrounded him and said: ‘You’ll have to get through us to get to Delling.’

I think he realised very quickly that online loyalties exist in real life too; these guys were going to make damn sure I was kept safe — if I got harmed, who was going to lead their guild to great glory?!

And that was just within the first 24 hours of my stay in Belgrade… it was going to be a long 10 days.

Bumming it around Belgrade

Building a community in an online place or virtual world

Burning the midnight, er, 4am oil...
The Daily Nightcap (just like a recap)