My cute, curvy Cuban friend Jossie (what kind of name is Jossie anyway? Is it a nickname of Josalyn?) recently posted a picture from her childhood. She told a sad tale to accompany her salad days photo from a school yearbook; a tale of her mum oppressing her wishes to look less like a floppy-haired, goofy blood clot (my description, not Jossie’s — don’t hurt me!) Not one to miss an opening, I thought I would share my childhood woes: the struggle and strife, and life, of a bowl-cut Beatles lookalike. 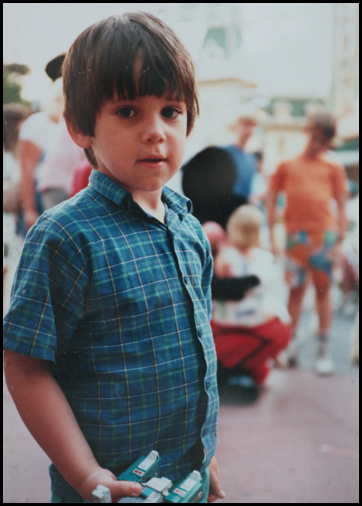 Unfortunately the haircut was not fleeting. It stalked me ruthlessly throughout my formative years, with my mother only allowing me to grow it after my 16th birthday. To this day I’m still haunted by brief visions of John Lennon out of the corner of my eye when I look in a mirror. Perhaps it was a rite of passage: become a man, develop body hair, lose my virginity, and stop looking like a poor, podgy, pudding basin child. My mother swears she wasn’t doing it out of spite, or some kind of cruel and unusual punishment. She also denies a childhood infatuation for the Beatles.

In actuality, I think my curse goes back another generation, to my grandmother. I’ve seen photos of my mother as a child, and she has the exact same hair cut as me. The contagious nature of nurturing!

While other parents beat their children, continuing the chain of abuse from their parents, my mother abused me mentally, with a formless and floppy coiffure.

Why am I making such a fuss about a haircut? Well, the clue was in the title — my haircut was really the only thing that plagued me through my childhood. Mind you, I didn’t have a girlfriend until I turned 18, and that sucked. I was always the one looking on and sighing wistfully from afar. I wish someone had told me back then that girls like guys to be confident and go-get-’em. It was only after I left school that my sister informed me that all the girls I fancied had a crush on me. I think that was the saddest day of my life, knowing I’d missed out on kissing some seriously beautiful European girls, and that I might never get a second chance. Thinking back, maybe it was the hair that scared them all away when I got close… Damn you, mother.

I was also bullied for a year or two, which caused some self-esteem issues throughout school (and was the main reason I never had the balls to ask a girl out). It was stupid, being bullied for being the brightest kid in school — and having a stupid hair cut (Damn you, mother!) Really, it’s depressing that such groups of people exist; they weren’t even bad on their own! I was friends with some of them individually, but when they grouped up… Ugh.

Anyway, I’m still a little mentally scarred from the bullying, and it’s probably my only mental ‘flaw’: I lack self-esteem when it comes to girls. I don’t actually believe a girl could be interested in me. It’s OK, while I’m talking, but when it gets right down to it, it becomes that that classic question: ‘How do you get a girl that’s laughing at your jokes into your bed?’ If anyone knows the answer to that, let me know.

With a grown-up view of things, I can see that my self-confidence issues are without merit and totally insane; but hey, who said fear or self-deprecation of any kind was rational?

But back to the happy childhood: you can see from the blurry background of the photo, that I was at Disneyland, at the age of 3 (I was a very large child!) By the age of 3 I’d been to Disneyland and Disneyworld and I’d walked up the steep hills of San Franciso. Back in England I was liberally educated, studying whatever I wanted to study — and excelling. I disliked sports, so I stopped running around and kicking balls. Instead I spent my time dissecting and rebuilding computers, and later programming and playing games on them.

The problem with a happy childhood is that there are no real stand-out moments that I can easily relate to and write about. I remember running around a lot — something I don’t do any more — and being a lot more bouncy than I am now. I remember being given a lot of attention from both my parents, and my inquisitive nature was never quashed. There’s a lot to be said for gentle guidance and the continual feeding of a young, impressionable mind.

I don’t propose to know more about parenting than anyone else — God knows I’ve not done it myself yet — but bringing up a child ‘correctly’ must be an interesting balancing act, if ‘correctly’ can even be defined (something to do with societal norms, I guess). I have friends that were brought up by completely claustrophobia-inducing and burgeoning parents, and I also have friends that might as well not had parents. Obviously I can’t be objective, as I’m the one in the middle, but I definitely think I’m the most ‘balanced’ of any of my friends.

It reminds me of my first week at university — do you know who partied the hardest, drunkenly slept with the most people and got horrendously sick? The kids that came from very strict backgrounds.

Temperance is the way forward!

Oh, just to tie it all up… Despite the hair, I do look a lot cuter in the picture than the modern-day hairy Sebastian, right? You can even see my dimple! Nice comments might encourage me to do a ‘Sebastian as a teenager’ entry (still sporting the Beatles bowl-cut!! Thank you, mother).

I also want to add that I still own the Transformer that you can see at the bottom of the photo… it’s on a shelf behind me, looking very dirty, dusty and worse for wear, but still very much my favourite toy.

An astronaut, caveman and photographer walk into a bar...
I had this great idea for a competition...