… but it’s now British Summer Time, and I’ve just had an hour of my life stolen away from me; nabbed, pinched and pilfered away by some minion of Morpheus.

I know it’s completely irrational — and thus, totally unlike me — but for some reason I feel a lot more tired than I should. It was as if time actually jumped forward an hour, in the blink of an eye. Which makes you wonder about the universal, agreed-upon consideration that is time, the fourth dimension. The forth dimension.

I should probably stop before this gets royally out of hand though. Before you know it I’ll be getting philosophical, and you know what that means — that means Nostradamus could finally check off the last item on his pre-apocalyptic checklist. He could finally tell everyone that he was right all along.

Tomorrow I’m going to try and continue (and finish) my story from Turkey. Right now though, I’ll give you one of my ‘morbid’ Jelly Baby photos, to keep you going until I wake up — after a thoroughly awful sleep, thanks to some British guy that invented Daylight Saving Time. Bastard. 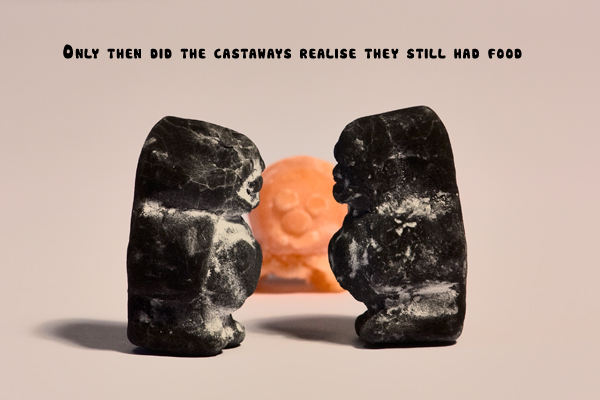 Insomnia, but not quite?

Let the right one in...
How Sebastian walked off into the sunset with a big American guy in his arms