This continues on from my hot air balloon flight over Cappadocia in central Anatolia, Turkey. If you like, you could also read about all of my adventures in Turkey.

Below us, as we flew over the unique, wild moonscape of Cappadocia, were thousands of hand-carved dwellings and churches. From above, we couldn’t make out much — just valley after valley of ancient villages and cities. I couldn’t wait to get down there and actually explore on foot; getting lost in some of the most ancient man-made structures on Earth is a dream very few people can fulfil, but I was about to!

I’d booked a small tour to Goreme (Göreme) National Park for later that day. Just three of us, and a tour guide. To say I was excited would be an understatement. Fortunately, I would be sharing the tour with a lovely, young American couple — and Americans can’t get enough of hairy, bouncy easily-excitable British guys!

Cappadocia and its ancient cities are so unique and so special that it’s actually a UNESCO ‘World Heritage’ site. That’s no surprise, considering some of the world’s most ancient, recorded history occurred there: It was the home of the Hittites in the Bronze Age and later provided considerable resistance to Alexander the Great, even as he was riding high on the wave of a world-spanning empire after destroying the Persian Empire.

Coming up to ‘modern’ history, and birth of Christ, Cappadocia was a safe haven for religious types. While Christians the world over were being persecuted for their cultish beliefs, priests were holing up in the hand-hewn caves now found in Goreme National Park. While it’s impossible to date when the structures actually became churches, it’s believed there were sites of Christian worship long before Emperor Constantine ratified Christianity as the religion of the Roman Empire.

Today, Goreme has the remains of the oldest churches in the world. To tell you that it’s weird to walk through a hole in the wall and find a 10th century Byzantine fresco would be a gross understatement. Around 900AD, the monastic complex at Goreme was carved out, and within 300 years, scores of churches were cut into the earth itself. Fast forward to today and there are still more than 10 fantastically preserved churches; churches that you can simply walk into! 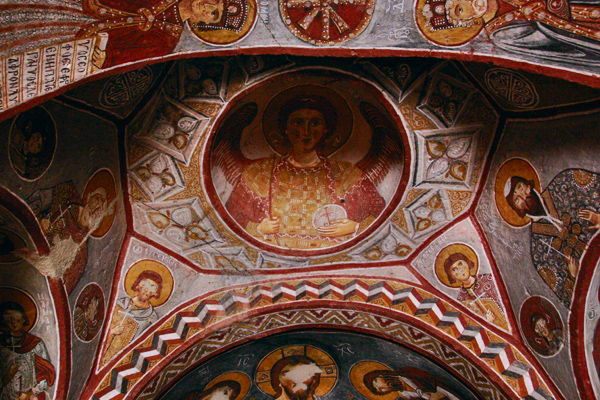 What I found interesting was how small these churches were. Perhaps due to the constraints of their tools, or their knowledge of engineering, the largest churches were only 3 or 4 meters square. You’re walking into a single room — soom of which were vaulted — literally plastered with murals and frescoes. I wonder if they were small for another reason though: perhaps these churches were built back when religion wasn’t about being grandiose and self-important. Once upon a time, religion was probably about prayer, and finding solace in some greater entity than ourselves. A small room, with a priest, would be more than suitable for that, right?

Somewhere along the line, probably hand-in-hand with advances in engineering, churches became bigger, vaster and more pompous. If you’ve been to a truly huge cathedral, I think you can relate to that feeling of awe and wonderment as you cross the threshold and look up at the stained glass window above the altar — but that’s the majesty of the building, not God touching you. I assume that churches grew in size as faith swelled, and their eagerness to reach the firmament increased. It’s the same reason banks are always large, imposing structures — they inspire you to trust and believe in whoever dwells within, whether it’s the bank manager or high priest. 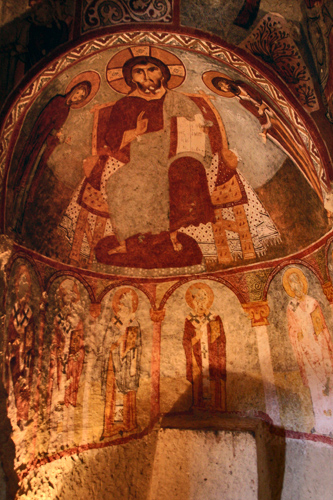 I don’t want to get too stuck into the topic of religion, as it’s rather obvious that the churches in Goreme were certainly not used as some kind of control structure; there were simply too many Churches for a single priest, or some particular rites of worship, to prevail! They were meant only as places of worship; vestibules of silence where you could be on your own, or with God.

We poked around for a few hours, scampering from room to room, trying to avoid the incredibly hot summer sun. There were houses, baths and even halls where they would gather to eat (but again, they were small, only a few meters across). My favourite features, though they scared me senseless, were the pitch-black escape tunnels that ran out of the city into adjoining valleys.

Building a city at back of a valley is already fairly hard to penetrate — you have to climb a mile-long incline to get there, with almost no cover — but, if an aggressive force actually made it to the top, there were a few tunnels that had been carved, by hand, out of the solidified volcanic ash.  These tunnels — which could be longer than a mile! — would enable the women and children to safely escape to another valley.

They also enabled poor, hapless, home-sick tourists like myself to escape to… ‘safety’. Egged on by some hopelessly enthusiastic American (‘Dude, I bet it’d be totally awesome…’), I finally steeled myself and climbed up some near-vertical stairs into the escape tunnel itself. 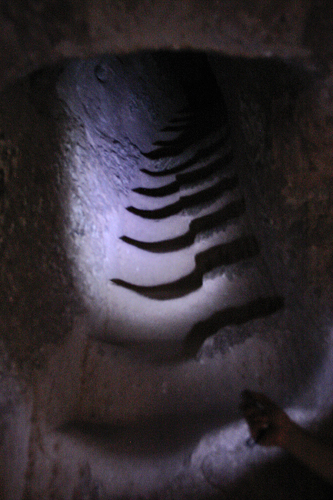 What followed was an experience I don’t really want to relive, but I will anyway, for your sake and certainly not mine. The stairs you see in the photo were just the beginning — there were two more flights, each one more run-down and life-threatening than the next. On the last flight, before the tunnel itself, the American in front of me slipped, fell, and broke the torch he was holding.

We were plunged into complete darkness. Most people have never experienced real darkness — the kind of darkness that you only get when you’re surrounded on all sides by at least 100 meters of rock. You’d probably consider a dark, moonless night ‘quite dark’; dark enough to bump into other people, at least. Let me tell you, a moonless night is about 10 times brighter than that escape tunnel — an escape tunnel that I was sure would shortly become my final resting spot. How ironic.

‘Seb?’ came back the hushed, not-quite-so-enthusiastic voice of Eric the Enthusiastic American.

‘You’re right, this was totally awesome.’

And so we crawled on in darkness. Or rather, I crawled on, using my super-human inner geek-strength to drag Eric behind me. Minutes went by, and soon hours. Scrapes from the jagged lining of the tunnel turned into bruises when we tumbled down some stairs and ended up in a pile of scared, sweaty man flesh. But we persisted, and eventually — about 2 hours later — we emerged into another valley to be greeted by a beautiful Anatolian sunset.

We were cut up and bleeding, shaken and stiff, rendered blind by the return of the sun. Worse than all that though: we had no idea where we were. The agreed meet-up time had long past, but when you don’t know where you are, it’s very hard to know where to go. Somewhere, Eric’s wife was eagerly awaiting his return.

I stood up, and looked down at Eric’s scratched, crumpled heap of a body.

‘She’ll be wondering where I am, Seb…’

‘I’m not the most athletic person in the world, Eric. I’m not sure I can carry you all the way to safety, after dragging your broken ass through a mile-long half-meter-wide tunnel…’

He grunted pathetically up at me. I sighed deeply.

And that’s how I walked off into the sunset, with an American called Eric in my arms.

Daylight Saving Time... bite me.
Having children wouldn't really be so bad, would it?