The Pink Jellybaby… less demented than the rest 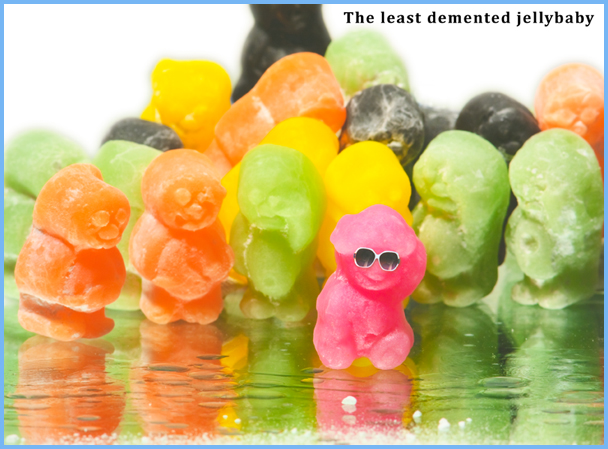 I should begin by saying that the tagline has nothing to do with the competition winner: Pink Jellybaby. I just had these two blank spaces simply begging to be filled with some funny text. No doubt, if the Jellybaby actually decides to use it somewhere on her blog, it will have altogether more flattering text… or none at all! The whole thing might also change significantly, because I didn’t send it to her before I posted this entry — this will be the first time she sees it! Hopefully she likes it…

Anyway, the look of those two orange jellybabies on the left: one staring; one with only half a face. They really do look like they rode on the short bus all the way to the beach to stare at the pretty little Pinko. They might even have licked the windows and drooled all over the floor in anticipation. If you kind of squint, the green ones look like they’re eating their hands, or sticking their fingers into their eyes. Self-inflicted gouging. Lovely.

The sad bit is, I shunted the ‘good looking’ jellybabies to the front, leaving the truly malformed misfits to languish behind, trying ever so eagerly to get to the pretty pink one. Now, a question to the oldies: Did jellybabies look better back in the day? Have manufacturing standards really slipped so far downhill that it’s almost impossible to tell jelly head from jelly foot? What are head-first jellybaby eaters like me to do? What if I bite the feet off by mistake and I have to deal with a kicking, screaming baby? Well, not kicking, but…

Anyway, because jellybabies are like… really old (almost 100 years!), I’m not going to write something funny about jellybabies that has no doubt already been written. Instead, I’ll just give you some fun and/or atrocious jellybaby-related links:

I was going to link you a poll that showed what bodypart people liked to eat first, but… what would be the point? Obviously ‘bite the head clean off to prevent the damn thing from crying” was #1 by some margin.

(Did you catch my reflection in the glasses of the pink jellybaby?)

I had this great idea for a competition…

A homage to pink

The self-portrait section has been updated
Watery Wednesday: Seattle Coastline