Today, Tuesday, is the first of a few limited-edition one-off ‘specials’. You know, like those episodes of Mythbusters where they go to Siberia, or borrow a bunch of high-grade military weapons. Each of these specials will focus on a particular aspect of I, Sebastian, normally featuring some kind of retarded dressing up.

You see, being a roleplayer and an actor, and having a mother that is also an actor and a massive, charismatic extrovert, I often end up in some pretty ridiculous predicaments. In a tutu, as Tinkerbell, or a fluffy bull-body suit as Nana the Dog. I’ve been cowboys (both gay and straight), a mouse in Cinderella, an extra from Dirty Dancing and, yes, I’ve been a pirate.

Quiet a few times, actually. I like wearing eye-liner, what can I say? Actually, I like the attention I get from girls when I wear eye-liner. I’d also be lying if I said I didn’t enjoy the occasional camp dress-up (most men would be lying if they said that!) Since Pirates of the Caribbean I’ve had 3 chances to get out the smock and saber and taken advantage of every of them!

My first time… (dressing as a pirate)… was in 2004  just after the first film, back when the world was only talking about two things: ‘Isn’t Johnny Depp dreamy? I didn’t think I could love a camp drunk, but in his case…’ and ‘Cor, Orlando Bloom’s a bit of a girl, but damn… he’s cute.’ In fact, about 90% of all girls had a poster of one or the other on their wall. Not one to squander such potential pulling power, my first attempt at Orlando Bloom as Will Turner: 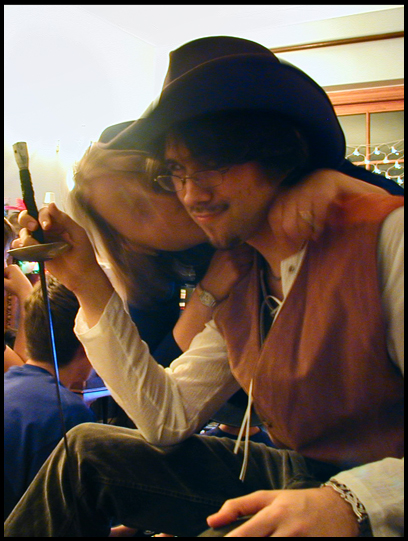 As you can see, I only managed a rapier that time — not quite the right kind of sword, but it did the job, as you can see from the rampant blonde attack. She was moving so quickly that she actually got in and out of the frame in the time it took the photographer to press the button. Drive-by kissing at its finest. This is also one of the very few photos with me wearing glasses and smiling.

Next, we have a fairly generic pirate. This was around the same time that I discovered eye-liner and started wearing it at every possible opportunity; well, whenever I was home alone, anyway. I wonder to this day if my mother noticed her eye-liner pencil going blunt without her use. Maybe she just kept it quiet, for my sake, and for my father’s blood pressure. 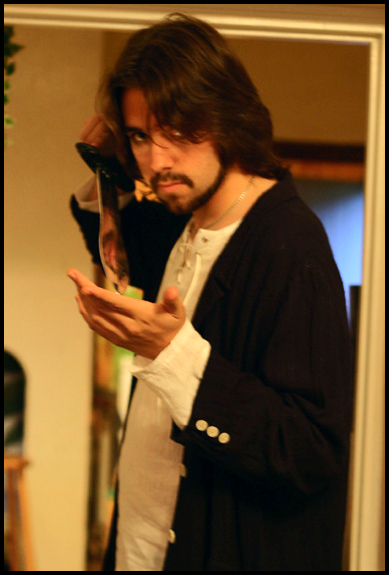 I actually wore my facial hair like that for quite some time — I quite liked it (and The American loved it, but that’s another tearjerker for another Time-Travel Thursday), but turns out I looked a bit old and, er, rapist’ish, so I finally stopped trimming my beard like that last year. I still think it’s pretty sexy though…

Finally, we have the new and improved Will Turner that I sported yesterday evening. I gave you a teaser yesterday, but now I’ll give you the other two photos… with a waistcoat and saber, the real deal! Eye-liner, waistcoat, slicked-back hair AND, most importantly, a big frickin’ phallic saber representing my overwhelmingly potent masculinity. 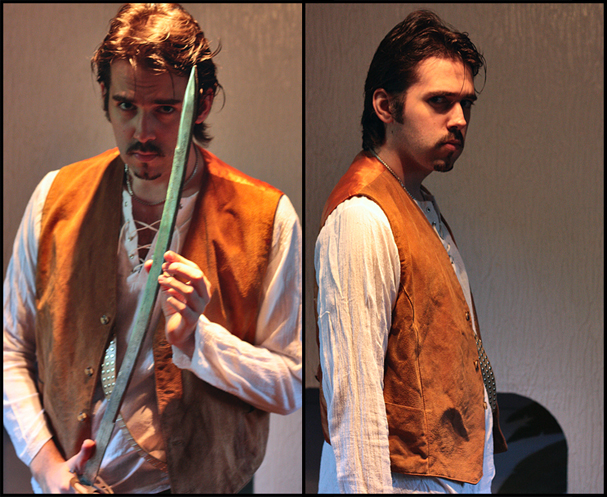 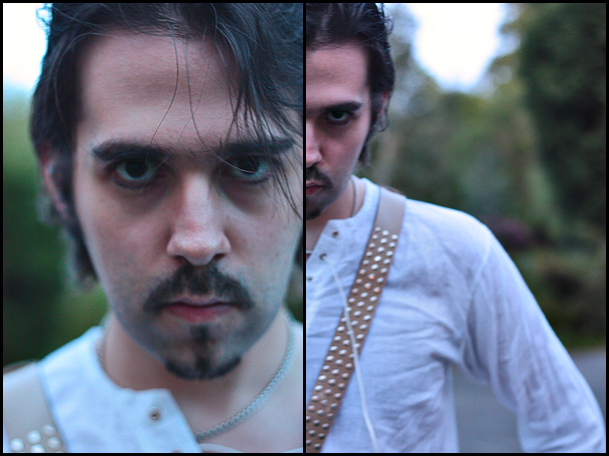 Christ, I think that’s quite enough photos for one day. I’m feeling all self-conscious now. Don’t tell me I messed up the make-up, please girls… my fragile ego just can’t take it.

Tomorrow, assuming the weather gets better, I should have coverage of Eric’s judicious winner-deciding ceremony. It was meant to be today, but it ended up pissing down; Eric doesn’t like rain, y’see…

And now for something completely different… cosplay: The Animal Special