And now for something completely different… cosplay: The Animal Special

What the phrase really means is that doing things differently is the key to keeping life interesting. Don’t always drive the same route to work. Don’t always buy the same food while shopping. Watch a new TV show, read a new genre of book — whatever, just mix things up. There is more than one way to skin a cat — a really damn morbid phrase from the 1800s (I guess when tanning was all the rage — but did people really wear cat fur?) — but it’s true!

And with that mention of furry animals, I have the perfect segue: my love of dressing up. Last month, The Pirate Special. This month: The Animal Special. ‘Animal’ is a loose classification. Let’s call it ‘non-human dress-up’. I should also warn you that in the following photos I am actually depicted as a furry, a race of dorks despised by every other kind of cosplayer and convention-goer out there.

Without further ado, to start off gently, we have my friend and I dressed up (ish) as mice in Cinderella: 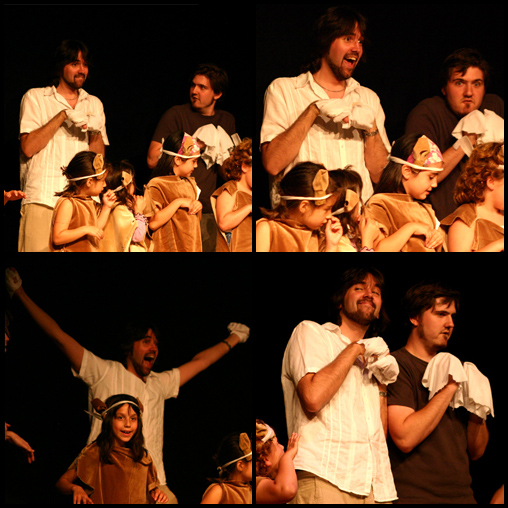 It was a bit of a rush job, thus the white pieces of cloth being the only actual part of our costume. But we looked funny amongst the kids, trust me. And we were meant to have a very simple costume, it was part of the plot (don’t question amateur dramatics, really…) Later in the show I realistically transformed into a horse for Cinderella’s carriage — amazing what you can do with a quick fade-to-black, cardboard cut-out and glitter.

On the back of my fantastic mice acting I was asked if I’d like to be in the next show: Peter Pan. By this stage, I’d already been Nana the Dog so I asked if I could be Tinker Bell. There was an uncomfortable pause.

‘Um… sure… but we’ll have to butch you up a little. We’re not sure if a guy playing a lithe, ballet-dancing fairy is really… you know, part of the show. But for you, Seb, we’ll make an exception.‘

And thus, I became Tinker Bell, fluttering around the stage with my long, flowingly balletic arm movements. Perhaps the best part about having a big Tinker was my ability to carry Peter around, instead of fitting him with a harness… 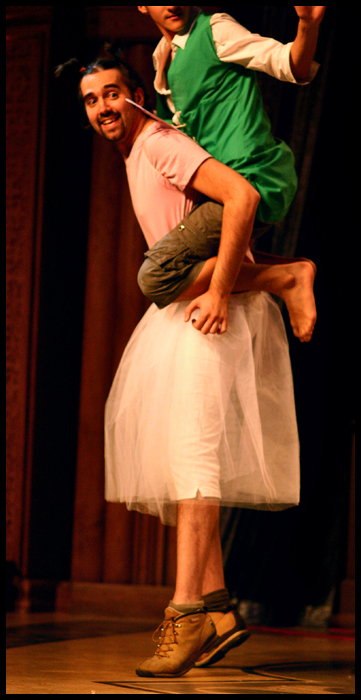 Note how I used my two years of ballet training to almost get onto the tips of my toes. He’s not a small boy either! Magic performed before the audience’s very eyes, MAGIC!

I fully expect to be asked to play Cinderella next year; I’ll be horribly disappointed if they give it to some stereotypically pretty blonde bimbo instead.

Finally, the cosplay that started it all: Nana the Dog. I was 18 — seven years ago now, Jesus — and naive. Oh so ignorant of the wiles my mother possessed. I was somewhere on campus, probably reclining on a sofa (that’s a tie-in to yesterday’s entry) when my mother phoned me:

‘Sebby, there’s a pantomime in a few weeks and we need more men.’ ‘Needing more men’ is a very, very common problem for amateur dramatics — it’s not unusual for a show to have only 1 or 2 old, greying impotent men and 20 women.

‘Sure… but I’ve got a pretty busy schedule at university…’ At that exact moment I had my hand locked behind my girlfriend’s head, holding her down. A busy schedule indeed.

‘Don’t worry, it’s not a very big part. Just chorus stuff.’ Notice the crafty subterfuge. Jewish mothers are sneaky. I fully expect my mother to forge my signature on a marriage certificate one day if she finds a ‘good, sturdy girl with fine hips’.

‘The day after your semester ends.’

And so there I found myself, rushing back from university, completely unaware of the sticky, synthetic-fur fate that awaited me. I knew the show was Peter Pan but beyond that I hadn’t a clue. I thought I’d be a pirate or perhaps a very, very large and exceedingly hairy Lost Boy. Maybe I’d just be standing in the wings singing; whatever, a local amateur dramatics group needed my help damnit, no matter the role, I’d give it my all!

I pulled up at the house and opened the front door only to be greeted by my mother rushing past me towards her car.

‘Come on! The show starts in 30 minutes!’ I started to protest: I wanted to eat, shower… shave!

‘Don’t worry.’ A mischievous twinkle in her eye. ‘You don’t need to shave.’

We arrive at the theatre with 15 minutes to spare and I’m pushed into the dressing room. I count all the pirates, Indians and Lost Boys; Peter, Hook, Tiger Lily and Tinker — they’re all accounted for — I glance around the room again, my gaze becoming frantic — all… but Nana. A large dog suit hangs from the wall. I stare at it, amazed by the success of my mother’s ruse. I notice a pretty girl smiling up at me with black face paint in one hand and some hair-ties in the other. Maybe it’s more of a smirk on her face. Yeah, definitely a smirk. I sigh,  accepting the imminent demise of my ‘cool kid’ reputation and begin to strip down, just 10 minutes away from curtain-up.

‘You’ll enter by crawling the length of the theatre auditorium with your cousin on your back. After that, just go with the flow.’ The director held me at arm’s length, assessing my get-up and make-up critically. Definitely the most minimal stage directions I’ve ever received before going on I thought to myself as stretched and limbered, preparing for my big entrance.

I guess when you’re a dog whose only lines are ‘woof’, ‘grrr’ and ‘purrr’ (it was pantomime after all) you can get away with just about anything. There’s something so incredibly unique about a 6’5″ beast zipped up in a fluffy dog suit with pigtails and one of his eyes painted black. I think the fact that I had my incredibly cute cousin on my back helped — sadly, only one photo exists of him riding on my back and I don’t have a copy of it. I must try to track it down!

The following image contains new and exclusive content of my head actually in the bowl. It’s a photo I’ve always wanted to share, but never found a suitable time to do so…

These are possibly two of the only photos with me actually smiling. That’s a bit sad.

Still, I can’t believe I didn’t score at the after-show party. Perhaps I should’ve taken the doggy suit off before flirting with Wendy and Tiger Lily.

So, um, you can now subscribe to comments… forgive me

This week, what you've all been waiting for… (maybe)

Greenfingers: what're they?
Stuck up a bell tower