I promised further proof that the winner had been chosen fairly and beyond reasonable doubt. Here it is: 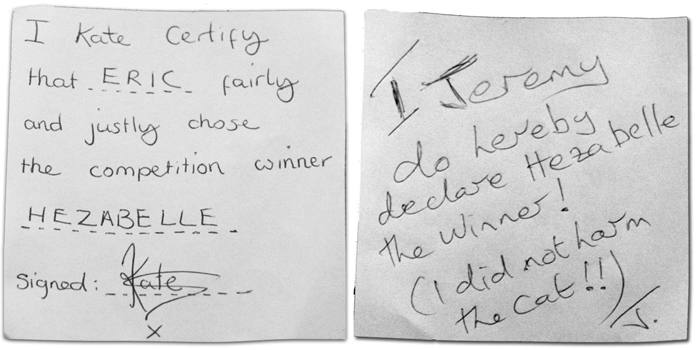 The one on the right being my father — the one that just had to interfere and force Eric to sit down. As I’ve alluded to in other entries though, my dad does tend to treat Eric a bit like the soft, docile dog that we never had.

And now, a cute story from my mother. Earlier, Eric came trotting down from the lounge as he’d heard my sister miaowing in the dining room… only my sister wasn’t in the house. My mother was showing my dad the video, and Eric had recognised my sister’s voice! He prowled around the speakers for a little while and then moved in to nuzzle and bite at them, ascertaining if they were in fact my sister. Confused at how hard and plasticky my sister had become, he walked off, confused.

The die is cast, the votes counted and the blind cat UNLEASHED!
It's a kind of magic