Stuck up a bell tower

This follows on from my tale of how I captured the perfect photo of Venice. Though it left me with an awesome view of the ancient city and a fantastic photo, it also left me cold and lonely atop a tall bell tower (the 14th century clock tower was actually across the square from me). The sun had set and the power cut to the elevator. I was stuck. The Hunchback of NotreVenice in the making. I’ve thrown in a few photos that have nothing to do with the story, I just want to force you to look at my photography, sorry.

I looked out of the window again: it was a long way down to the dark piazza below. There were still lots of people milling around, enjoying the ambience of Venice and the music wafting out from the exclusive restaurants and hotels that lined the square. But none of them were looking up at the tower. Noone could see me frantically waving my arms, trying to attract attention. I hadn’t started screaming yet but it was only a matter of time. If I resorted to screaming, would my voice actually carry far enough to be heard? 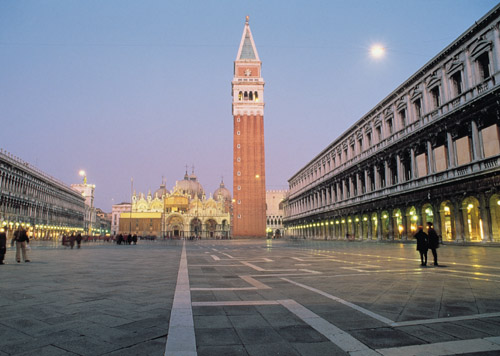 (That’s not my photo, but you get the idea of just how tall the tower is.)

Before heading to Italy I’d actually just watched through the first three seasons of MacGyver, which goes some way to explaining why I found myself in such a retarded predicament. I wasn’t afraid, damnit, but in chasing the perfect photo I’d found myself alone at the top of a tower with nothing but a camera bag, an empty bottle of water and a mobile phone that I’d forgotten to charge the night before.

With the temperature quickly dropping and the square below me starting to empty, my mind kicked into overdrive. I knew that a night at the top of a bell tower would hardly kill me but I had a lovely high-ceilinged bedroom to get back to. I was sure that I could smell the faintest essence of pizza in the air, but maybe I was hallucinating; either way, my stomach grumbled. This was Italy, apparently home to the best food in the world, and I was stuck up a tower and starving. What would MacGyver do? I emptied my camera bag and looked at the contents. No paper clips, no bullets, just a map of Venice and my camera. There weren’t even any bird droppings on the ground that I could scrape together to make a rudimentary flare gun.

I thought about phoning my mother but I knew how the conversation would go:

‘Dad told me you hung out at the top of a tower to get some nice photos.’

‘Sebby, what did I tell you about doing dangerous and stupid things? Your primary purpose in life is to produce grandchildren for me.’

‘A son of mine that gets himself stuck up a tower is no son of mine!’

So outside help was out of the question… Plus, what help would my mother be able to provide anyway? Tips on how best to tenderise my shoe leather into something edible? A suitable prayer to Moses? I shook my head and looked down at the pile again. The map… paper!

I could use my pen to write a note! Help, I’m up in the tower. Send aid. Don’t ask me to let down my hair, it’s not long enough. But what if an Italian person found it, one that couldn’t read English? I started to draw a crappy illustration of a man up a tower. It would have to do. But how to get the paper down to the square and get it noticed? I thought about a paper plane, but they’re notoriously hard to aim, and someone would be unlikely to spot it.

I looked down at the pile again. An empty water bottle…

I could put some coins in the bottle! Wouldn’t that make one hell of a noise if it hit the ground at terminal velocity? I worked quickly, the plan now complete, strapping the note to the bottle with one of my shoelaces. I screwed the cap on tightly and shook the completed franken-bottle, admiring my handiwork. Moving over to the window I sighted up a couple that were enjoying a romantic, candle-lit dinner about 100 meters away. I stepped back and took a run up, delivering the best pitch of my life.

It sailed through the air, landing about 20 meters from the couple. It made one hell of a bang-and-rattle, startling not only that couple but most of the people currently eating dinner in the Piazza San Marco. MacGyver would’ve been proud! Sebastian however, after the elation subsided, was just plain embarrassed.

I quickly whipped out my phone and used the dregs of its battery to turn on the bright light used by the built-in camera. I shone it down in their direction; they looked up!  Success! But perhaps I’d been a little too successful — a lot of people were now looking up at the tower, wondering where the vicious coin-filled explosive projectile had come from. There was in fact an arc of people forming about 50 meters from the tower — close enough to look at me, but not too close that I could surprise them with another weaponised water bottle.

Now I started to wave frantically and scream like a girl. Someone finally got the hint and rushed off into one of the restaurants, raising the alarm. My only concern was that they had mistaken me for a lunatic sniper and instead of the tower staff arriving, armed police would arrive and shoot me out of the tower. Eventually, after another half hour or so — nothing happens quickly in Italy –  some official-looking types approached the tower, unlocked the front door and switched the power back on.

I quickly packed up my stuff and limped over to the elevator, only to find it was already on its way up. I was a little nervous now, knowing I’d probably overstepped quite a few ‘oh, he’s just a silly tourist’ boundaries. Would I emerge from the tower a victorious hero, brandishing my camera above my head and revelling in my artistic prowess? Would the crowd boo and hiss, or applaud? The elevator sure was taking its time. Would I be in all the newspapers by tomorrow evening? Surely, Italians have a sense of humour, right?

At last, the elevator doors opened. A couple of very stern, short and balding Italians looked up at me, wondering if I would come easily or if they’d have to kick me in the ankle first. One of them reached behind their back and instinctively I thought this was it: I was going to be shot dead in Venice, on the first day of my holiday. At least I would die a martyr to the Bohemian movement… and my photos would probably go up in value… my mum would be grateful for that, I guess… But it wasn’t a gun, it was some handcuffs.

The other guard grunted something unintelligible in Italian and shoved me, suggesting I turn around to be cuffed.

When I finally emerged into the square there were a lot of people grinning at me –tourists, I guess — and a lot of peeved-looking Italians, probably all thinking that I’d just defiled their beautiful bell tower. Fortunately, none of them spat at me as I was frog-marched across the square but there were definitely a few boos and lots of noisy tutting. Maybe, just maybe, there were a few cheers from fellow photographers standing at the back of the crowd.

But where were they taking me? Surely not to the Venezia police station… This month, on Seb’s blog…

So I'm plotting the next installment of Day 37…