This year I’ve planned to travel three times but due to a variety of unfortunate circumstances, I’ve ended up sitting on my ass going slowly stir-crazy for eight (8!) months. I’ve not left the country since Italy last October.

In February I was meant to go to Wales — a tour of the coast, from Cardiff to Pembrokeshire, up to Aberystwyth and finally a day or two under the shadow of Snowdonia, the highest mountain in England and Wales! I booked plush hotel rooms and cute, romantic B&Bs. I worked on my cardiac fitness through a strict training regime. I even dug out the dusty Sebby Sex Manual that hadn’t seen active use since university. AND THEN… the girl cancelled two weeks before we were due to leave. Bugger.

In March there was meant to be an epic coming-of-age trip to the Isle of Skye (in Scotland) with my American cousin Mike. But he broke his leg in a cycling accident (I told him exercise wasn’t healthy, but did he listen, nooo…)

And in April I was meant to go to Ireland… but my host, Irish Dave, was held up in Boston (damn those Americans). I’ve always wondered if all those Davids are bothered by the prefixes they get lumbered with: Fat, Small, Irish, Scottish. I’m often glad that I got lumbered with a 9-letter name (and 35 letters in total… thanks, mum and dad). If nothing else, at least my name is unconventional.

Anyway, May has come and gone (it’s birthday season for our family, so it’s hard to excuse myself to travel), and now it’s June. Never have I felt more ready to travel! My fingers scream at me every time I sit down to type and at night my eyes ache, even when shut. Then there’s the matter of overall fitness — it can’t be good to sit around on your ass for two-thirds of a year, right? I’m amazed that when I do travel, I manage to walk for two weeks without collapsing once — though the regular pizza and gelato breaks probably help… 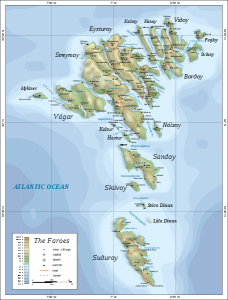 With that whine out of the way, I can now tell you that I’m going to the Faroe Islands! And there’s no girl, cousin or prefixed Dave involved with the arrangements! The Faroes are a small cluster of islands half way between Scotland and Iceland, i.e. in the middle of frickin’ no where, with a grand total of 49,000 wind-swept citizens. The biggest city, Torshavn, has 13,000 people — but the rest of the population is spread out over the archipelago of 18 islands and 120 towns and villages. The smallest town has a population of… 1. The average temperature at the height of summer, in case you were wondering,  is 11 degrees Celsius. But it rarely goes below freezing, what with it being surrounded by lots and lots of water which in turn is under the effect of the Gulf Stream. It’s damp all year round; just how I like it!

The main problem is actually getting there. Being, officially, part of the Danish Kingdom, you can fly there from Copenhagen all year round. From the UK you can only fly there during the summer months, and there’s only 1 or 2 flights a week! There’s also the problem of fog. There’s lots of damn fog. It’s not uncommon for there to be too much fog to land the plane, in which case you’re diverted to Iceland for a few days. Assuming you make it to the Faroes in one piece, you then have to find somewhere to stay — tourism isn’t a big thing there, what with there being almost nothing to do, except look at rocks and stuff. I think there are no more than 10 hotels in the Faroes.

Fortunately, I shan’t be staying in an over-priced hotel! I have a friend that I can stay with (God bless World of Warcraft…) and he has a boat to get around with. He’s also an enthusiastic photographer, so I hope he’ll be able to show me all of the sights. He keeps mentioning under-water caves, which I assume are dangerous little things you can visit on your boat while the tide’s out. In fact, I remember some TV episode of ‘Dramatic Reenactment Life Savers’ where a couple of explorers got stuck in such a cave after the tide came in…

Such photographic opportunities leads me into a little business venture I thought of in the shower this morning. My hands were working their way over the rolling, English hillocks of my chest and stomach/paunch when my Jew-sense started tinglin’. My nose actually twitched and my hands stopped moving while I turned the thought over. I have a thoroughly un-Jew nose, which I am normally grateful for, but there are times when I wouldn’t mind it being a bit bigger. Anyway…

The idea is: could I possibly sell personalised landscapes? I was thinking of a beautiful Faroese landscape, with me standing in the corner holding up a piece of paper with your name on it. Like this: 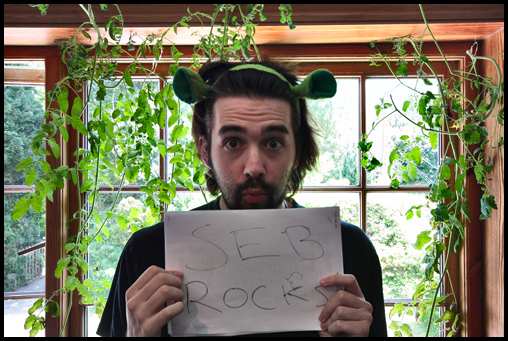 Only it’ll be a prettier landscape, and it’ll be your name instead of ‘SEB’ — or, heck, you can choose your own message. ‘[YOUR NAME] SENT SEBASTIAN TO PROSPECT FOR GOLD’ — whatever tickles your fancy! I will also wear your hair band or hat of choice — of which I have many. I will even share my gold-sequinned Minnie Mouse ears, if there’s enough interest (i.e. someone actually buys a Personalised Sebby Landscape). For the right price, I might even dress up in your costume of choice, but bear in mind that I doubt I can get the fluffy dog suit through customs.

Here are a few photos of the Faroese landscape to whet your appetite. A Personalised Sebby Landscape of similar or even better quality could be yours…!!

(That’s Aurora Borealis — the Northern Lights — which I sadly won’t be able to see during my visit… but they’re pretty, eh?)

Buy your own personalised, amazingly aesthetic Faroese landscape today for only £20!

If I haven’t yet convinced you to buy one (it being a recession and all), I will be demonstrating the wonders of personalised landscapes — and my hairbands — over the next few weeks, before I actually leave (sometime around the beginning of July, I hope). Also, if you have any Nordic/Arctic Circle travel tips, now’s the time to share.