If you are in any way squeamish at the sight of meat or blood, or you’re a militant vegetarian/Greenpeace member, you probably want to skip this entry. Just scroll on down really quickly past the nasty pictures. If you like, there’s some photos of me making an ass of myself yesterday — but if you’ve already seen those, um… go buy a photo of mine?

Anyway, all links in this entry, apart from one, are ‘safe’. I’m not going to surprise you with some gory, nasty photo, don’t worry. There are at least two graphic photos in the entry itself though — you have been warned. Oh, and if you have no idea why I’m talking about the Faroe Islands, it’s because I’m going there next month!

The Faroe Islands, by virtue of being, literally, in the middle of frackin’ nowhere is a little stuck when it comes to food. Their first airport was built in 1942 by British forces; for the 1500 years leading up to the airport they had to sustain themselves through self-sufficiency alone. The poor island-dwellers haven’t been  dealt a very good hand though (and why would people live there in the first place, anyway?): they have some grass, but due to the prevailing winds and inclement weather, the grass isn’t bountiful enough to rear cows for food. Above-ground vegetables are also hard to grow for the same reasons! They have potatoes, but even they are relatively recent import for Christ’s sake. Their primary food source is sheep, which account for something like 50% of their total diet. 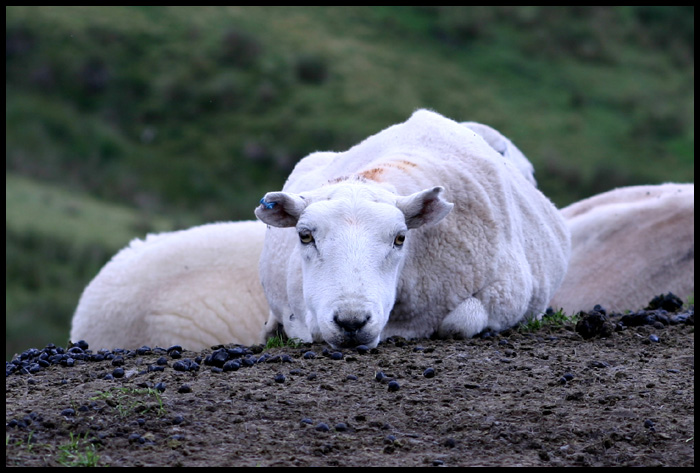 (Not actually in the Faroes — just a doe-eyed sheep that I found in Wales years and years ago, which I’ve not shared before!)

Along with sheep, and by far their richest resource, they have the North Atlantic (which happens to be one of the cleanest bodies of water in the world). It’s positively stuffed full of fish and whales, both of which have been farmed for hundreds of years. They also eat seabirds, like puffins — but don’t worry, they’ve been sustainably hunted for 300 years and there are millions of them up there. Even the pilot whale, their whaling website hastens to add, is very gently farmed: an average of 950 have been caught in the last 10 years, which provides 30% of all meat produced in the Faroes! As you can imagine, very little goes to waste — even the blubber is used… or consumed! (If I sell enough Personalised Sebby Landscapes, I will eat whale blubber and photograph it, just for you guys.)

With their four food types out of the way — sheep, fish, bird and whale — I’m now going to wow you with their delicacies. I use the term ‘delicacy’ loosely. Even my Faroese friends tell me that most of these foods should be eaten with your eyes shut and a clothes peg across the bridge of your nose. Only push onwards if you’re interested in what a smoked sheep looks like; you have been warned… again!

In the Faroes the entire concept of artistic, culinary prowess is foreign. Only in recent years, since the second World War, have international dishes begun to pop up (like pizza). Food preparation in the Faroes is rarely anything other than functional. Now, moving on: if you’re a cook yourself, or you studied biology at school, you probably know that salt is a very good preservative. In fact, it was the only preservative we had for hundreds of years! Sailors had big barrels of fish and meat, heavily salted and Old Worlde travellers would often carry salted meat jerky. And up in the Faroes… they have salty wind! Lots and lots of salty wind.

I wish I was making this up but, in the Faroes, meat preparation and preservation — the age-old and finest tradition, the most elite way to cure meat and fish — is to hang it in the salty sea air. While hanging meat is nothing new — we normally do it with smoke, instead of all-natural home-reared ‘salt air’… — the Faroese have gone one further!

They hang whole sheep up. For days and even weeks, they slice that sucker open and hang it up to dry. And, if you go the whole hog and hang it for over a year and eat it raw, you get the finest of all Faroese delicacies: Skerpikjøt. 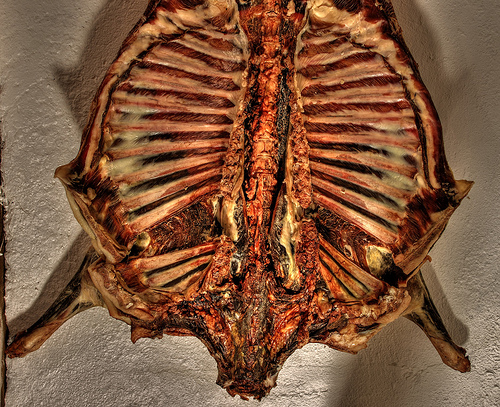 Yum (you have to admit, it looks truly awesome). Such is the prevalence and popularity of hanging meat, most Faroese houses have out-buildings called ‘hjallur’ that are dedicated to wind-drying. I don’t know if they hang them for months to bring out the flavour, or if they’re just too lazy to light a fire. I’ll be sure to sample it when I visit next month. 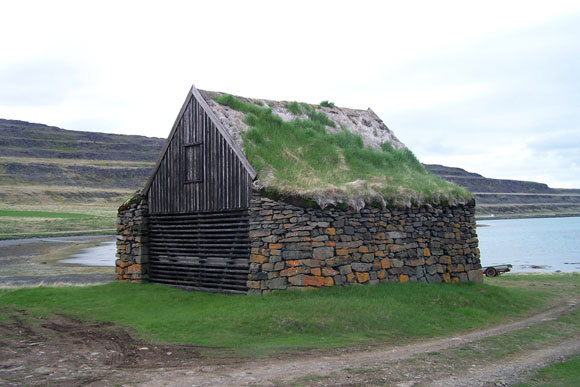 As I’ve already hinted, due to their dreary desolation in the middle of the Atlantic, nothing is wasted on the Faroe Islands. They eat whale blubber, something most people will find revolting (though, it’s the same as eating pork rind, no?) but perhaps more disgustingly the only bit of sheep that they have deemed ‘inedible’ is the current contents of its stomach…

(Click here to see the sheep’s head. I didn’t feel comfortable putting it right here on my blog… it’s pretty grim. My inner connoisseur appreciates the two potatoes laid daintily by its side though…)

Yup, brains and eyeballs. And I suppose they eat the intestines too… the Faroese really get love value for money! It also seems they eat a lot of mutton, rather than lamb, so I assume they milk the sheep for years before finally butchering them. If any vegetarians are still reading, I hope you’re impressed with their very efficient use of livestock!

Finally, though I’m not sure if it’s true (my Faroese friends might be playing a mean trick on me), the epitome of blue-ribbon, Michelin-star Faroese catering is… stuffed puffin! But try as I might, this is the best photo I could find of a stuffed puffin. 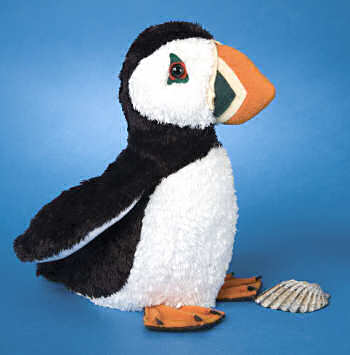 Never leave me alone with a camera and tripod...
Email subscriptions