The swan that would not sit still

(Or possibly a goose. But I think it’s a swan.)

Yesterday’s entry (the one that features my first ever poem) had a lovely photo in. But of course I took more than just one good photo, duh!

So… for about 10 minutes I tried to get a swan to sit still. It’s a lot harder than you might think. I tried soothing noises (perhaps I should’ve podcasted this entry, so you could judge just how soothing my ‘swanish’ is), I tried arm-waving and then sitting dead still, playing dead. I even tried shining the light from my phone, hoping it would transfix him with mortal fear.

No dice. He just wouldn’t sit. 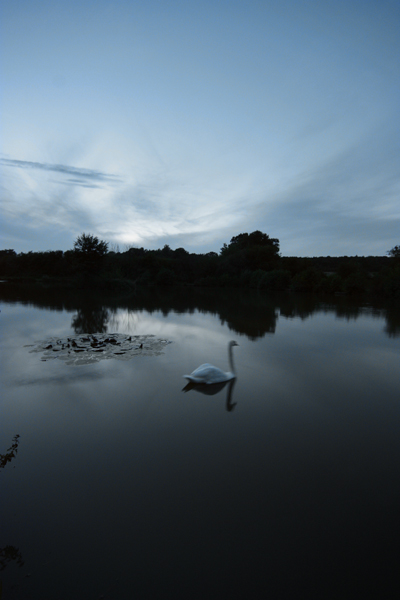 But, my friends, do not despair for I have some pretty ones to make up for it!

First, the sunset that I was actually chasing (you’ll need a properly-calibrated monitor to make out the detail of the field):

This is about 20 minutes later but from the bottom of the valley so there’s a lot less available light. You can see how the sky could lead into the photo I showed you yesterday! I like the water lilies!

Finally, just as another example of what you can do with a little digital trickery, check this out:

This photo isn’t real (you’ve already seen the original, further up the page). But it’s still beautiful right? I wonder which one would sell better…