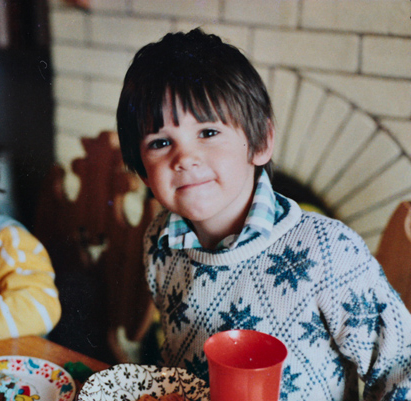 This is a continuation from a series of entries I wrote chronicling my childhood and teenage years. For some reason I got sidetracked — I wrote about ‘that tale from my teenage years‘, and before I knew it I was writing about my crazy relationships and sexual encounters.

And then I got talking about The American. I often write as if I’m not affected by what unfolds — chilled, objective — but the truth is… I am. I am effected. I’m not soulless. I’m not frigid or cold. I just don’t often let my feelings bubble to the surface. I don’t linger or fester. But yes, you might look at these broken relationships of mine, these squandered chances, and wonder: ‘How come he sounds so remote, so unbothered?’ – well, the real truth is: I am bothered. I am right there, reliving the memory as it flows through my synapses to my fingertips. Unfortunately — or fortunately — I have an incredibly vivid imagination. I can recall almost any instance in time and be there – and when I write, I’m tapping into those memories. I frown and smile and sigh and cry as I write. You just don’t get to see it… (Should I apologise here? Maybe?)

As to why it all comes out ‘a little distant and removed’, I have no idea. It seems I’m objective and sensible to a fault. Perhaps I’m just too damn rational, if that’s possible.

Anyway, when I was younger, from 10 through 17, I was a lot less rational. I was shy, reticent. I could be made jealous very easily. I had little to no self-confidence. All I really had were my dreams. And computers.

I know it sounds dramatic, but it’s true. I had two immutable things that no one could take away from me: dreams and computers.

I think you probably already know quite a lot about my love affair for computers… so dreams are what this entry’s about.

These are the roles I dreamed and the fantasy lands I drifted to when I was being teased, pushed around, bullied.

Things I’ve Wanted To Be, Since The Age of Three

Which brings me up to almost-present time! After school I went to college and studied photography, purely as an artistic outlet. At university I studied Computer Games (and computer networks — and if you’ve read my ‘About’ page, you’ll know that I now want to make video games).

After I graduated university I knew only two things: 1) I didn’t want to work in an office from 9 to 5 — and 2) I want to travel the world and see what the rest of Earth (and the universe?) has to teach me. I learnt more about life in four years at college and university than in the 16 years beforehand. In the last few years, as I’ve travelled from continent to continent, country to country, city to city — and across the Rubicon! — I’ve learnt a lot more than university could ever hope to teach me.

I’ve discovered that it’s very hard to have a purpose when you’re always discovering new things that you can be. How can I stop and design video games when there might be something even cooler just waiting to be discovered? (This bit ties into my ‘What makes me tick?‘ entry.)

I honestly can’t fathom why anyone would cease moving, set up shop and extend their tendril roots. Why work in an office from nine through five for 45 years. Why.

I don’t know, mum. I might never find out. But the journey is the best bit, right?

The competition! Or: 'Make Sebastian Suffer'

Thoughtful Tuesday: Shattering the infinite loop of racism
Looking through the window