Ah, now this is a meaty one. I’m not going to name any names, and I ask you kindly to do the same. I’m going to speak in general terms and hope I don’t offend too many people. But if you’re a believer of some kind and I make you question your faith… don’t hurt me! It’s a good thing to re-evaluate your environment occasionally. Things change, don’t forget. Something that made sense a while ago might not make sense now. With that said, on with the show. 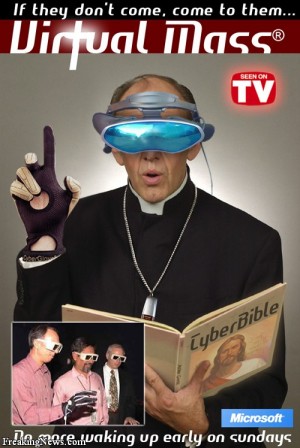 Religion is technology. Something — something new, some kind of data — is discovered. It’s then honed and refined. And then it becomes a religion. Religion is simply ‘high-tech’.

Along the way there are fads and cults but ultimately, if it passes through its trial by fire, it becomes a religion.

Big pill to swallow, and I need to provide an example. Let’s take Jesus (sorry Christians), as he’s as close to omnipresence as things get. Look at your surroundings right now: your computer, iPhone, TV, keyboard. Pretty awesome eh? Do you know how any of them work? Maybe. Mostly they just work, you don’t question it. You sure as hell don’t call your computer a ‘box of miracles’ — well you might, but most of you probably don’t.

But that’s what it is. The fact that we can send data from one side of the planet to the other in a fraction of a second is a frackin’ miracle. We have the knowledge and power to surgically replace faulty hearts and perform crazy experiments at a sub-atomic level — that’s a damned miracle.

Only it’s not. It’s just technology.

Do you really think Jesus was a miracle worker? The son of God?

Just because I control the flow of electrons and fly through space at the speed of sound… does that deify me? Do you prostrate yourself before me; am I the Messiah? No — at least I doubt it. I’m merely harnessing technology.

You see, all these fields, spheres of thought and belief are really, really closely entwined. I’m close to a resolution, an epiphany: I can just about put my finger on it but it’s… slippery. Magic is the key to belief — mystery, that is. You don’t believe in something tangible, something real — you don’t believe in your car. You believe in true love, God, UFOs.

But there’s no such thing as magic, beyond impressive use of technology or new inventions. It’s magic until you learn how it’s done… and then it becomes mundane.

Is religion the same thing? Was talking to God, receiving divine prophecy and turning water into wine what passed for ‘high-tech’ 2,000 years ago? Did Jesus have some sterilised bandages or knowledge of Eastern medicine that cured large swathes of sick people? Does that make him a work of wonder, or merely a nice guy with some great tools? Why don’t we drop to our knees and deify Sagan or Einstein, our modern-day masters of the universe?

Our understanding of the universe is so great and our critical analysis now so exacting that magic and mystery are finding it impossible to gain a foothold in today’s society. Fads will form, and cults will climb to power and become religions, but as technology improves and shines a light on their inherent fallacies, they will fall — as soon as the curtain is whisked back and the truth revealed, the mystery will melt away. The magic castle will crumble and the religion, cult or fad will perish.

Without magic, there is no no faith, no prayer, no belief. Without mystery — the single most powerful force in human nature – there is no no religion.

In 50 years our understanding of the universe and humanity will be so great that I’ll be able to zap your body and fix it of all maladies. No side-effects. No caveats. What will existing religions do then?