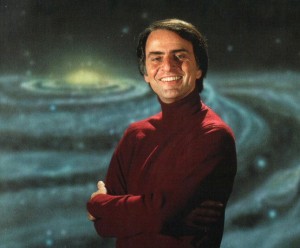 A few weeks ago I watched through the 1980 series ‘Cosmos’, written and narrated by the master himself, Carl Sagan. It was re-released on DVD recently, and with western society’s infatuation with ‘popular science’, as made famous by the likes of Richard Dawkins and David Attenborough, I figured it was time to give it a watch.

It might be almost 30 years old but it’s awesome. It’s the best grounding in science, philosophy and (astro)physics that you can ever hope for. It’s dated, sure (check out his turtle-neck jumper), and it’s very out-of-this-world in places (Sagan was a dreamer), but it’s so, so awesome in its entirety. It’s the kind of thing I would force my children watch as soon as they can read and write. With matchsticks to prop their eyes open.

Cosmos got me thinking. A dangerous pastime, I know. [Name that musical...]

We all seek solace in wildly different things.

Solace means, literally, ‘to solidify’. Consolidation, console, solid — they all have the same Latin root. Finding solace is finding solidity in the world. Solace is when you feel stable. Finding solace is searching for that ‘rock’, that bastion of hope, courage, safety — whatever — it’s something that makes you feel safe. Solace is discovering that reserved spot in the world’s cosmic parking lot that no one can take away from you.

No one’s doubting that everyone wants solace. Heck, we might even need it. Most people go through life looking for it and when they finally find it they don’t (can’t?) let go. Scarily, people seem much more fatalistic once they find their real solace. It’s as if our life purpose, as humans, is merely to find a place to live, reside, be. Then once we get there, we can weather an awful lot with our solace-powered resolve.

But what is the driving force behind that resolve?

It seems to vary from person to person, which is odd. You can easily imagine the preacher undergoing extreme duress and displeasure, while seeking solace in his God. But what about the man that derives his strength from science, from the knowledge that we are no more than physical meatbags that are predestined at birth to live, exist and eventually die. Harder to imagine, eh? I think the usual argument here is that we’re ‘programmed’ to seek faith and mysticism… but why are some people are satisfied with no repentance, no God, no afterlife?

The obvious question you then have to ask is: have there always been people that can’t find solace in faith alone? Throughout history have there been agnostic solace-seekers? You can certainly have faith in science, that’s for sure — that’s kind of a prerequisite for scientists — but maybe the various churches throughout history were too strong, their mysticism too alluring?

I think the underpinning of solace is belief. There has to be something you really, really believe in. Be it science, god, philosophy, money, love, it doesn’t really matter. The problem for religion is that it’s becoming harder to believe in. There have always been those that found some solace in science, but the church quashed them. Or burnt them. Either way, belief in non-deity was disallowed (were emperors deified for this reason?)

Nowadays religion is a bit easier going: you’re free to believe in God (or whatever else) while it makes sense to, while you see through a rough spot perhaps. It’s very easy to believe in faith and mysticism (we’re programmed to do so, remember?) so it just comes naturally — having problems? head down to the church! But now, without the draconian Churches, without the belief-under-duress, wouldn’t it make sense to seek solace in something else, something tangible, something like… science? A lot of people are doing it. Dare I say there are more atheists and agnostics than ever before. Why don’t religious types cave and listen to the truth of science?

It would make sense to move on, no? No. People don’t like to lose their solace.

I’m sure you’ve heard stories of those people that have ‘lost God’, or the love of their life. They’re broken. Disbelief really shatters you. It seems solace is highly conservative. When was the last time you heard of a devoutly religious person dropping the word of God in favour of Darwin? I mean a happily-engaged-and-solace-fully-sought practitioner, not a neophyte or extremist, incidentally. It would seem you only get one solace — one love-of-your-life — unless you are forcibly sundered.

Once the older generations die out and today’s children, our progeny, are free to seek a solace of their own choosing, the end of religion and the rise and dominion of the machines — er, science — might actually be upon us.

The Landscape Photogasm (#1)
We're camping... but we have no tent