[In the olden days I used to always have punchy, interesting titles on my blog entries. Funny how that's kind of died down. I wonder if more people would read if I try to be sensational...]

Yesterday I began an epic journey of introspection self-actualisation. I’m trying to digest 2009 by labelling the major milestones or stand-out points as good, bad or ugly. I actually made a list on paper (I was in the car), and I couldn’t actually come up with much bad stuff. Is it really too crazy to suggest that not a single bad thing happened to me in the span of a year? Hm…

Anyway, first, a couple of photos from the archives that never made it to Flickr or this blog. 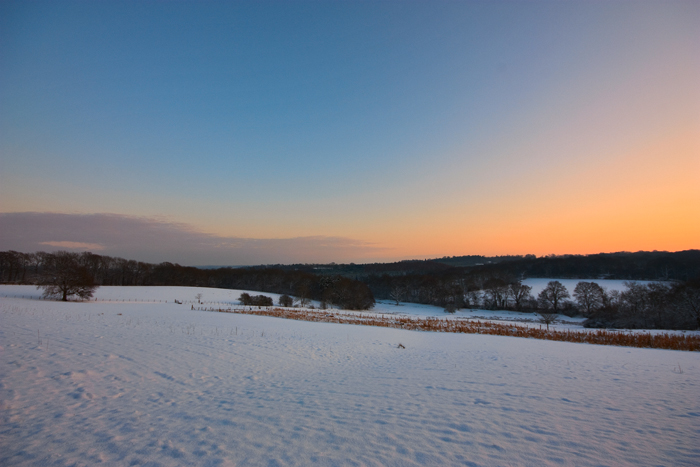 (This is about 10 minutes before the ‘pond sunset’ photos that I showed you last week. I can’t begin to describe how much I love low-angled winter sun. Look at the shadow cast by the little mounds of snow on the ground! And gawd… the colour. THE COLOUR.) 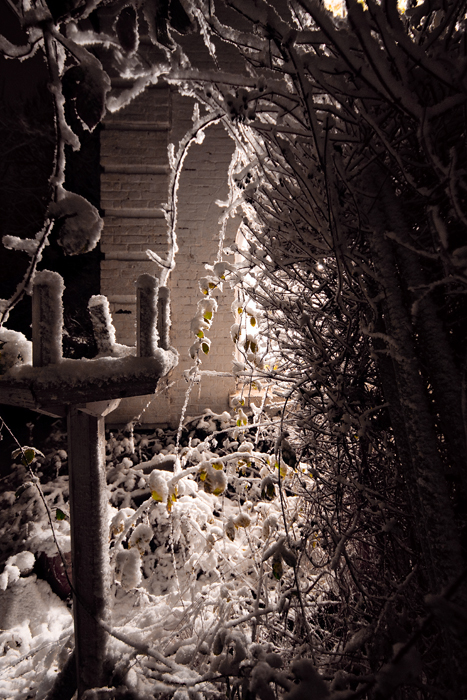 (This is an odd one, taken at around 1am, just as the snow had finished falling last week. Broken bird table in the foreground, dining room window in the background. I like it; it makes it look like we live in a castle — but it’s a bit odd.)

This is a good, meaty one. With my daily grind shifted away from website design, my mind seems to have opened up. Perhaps it’s the equivalent of travelling to another country, but mentally. I find myself contemplating the intricacies of concepts and ideas that simply didn’t occur to me last year. It’s not like these are new thoughts either: almost all of what I write here is old ideas, with a new spin.

I’m just infinitely more capable of turning an idea over in my head to analyse all of its facets.

I want to believe that my elevated ability of critical analysis comes from reading and writing, but it might simply be the culmination of travel and life experience. Writing here certainly helps — it’s no good having revolutionary, world-agitating ideas if you can’t put them into words.

It’s definitely led me into some dark and oppressive trains of thought too. I’d never really got the whole ‘epiphany’ thing until recently, when I was sitting outside, looking up into the cosmos and trying to catch shooting stars. Woah. This thing is… big.

I told you I was really struggling to find bad things in 2009. I guess we’ll have to leave it as simply ‘no girlfriend’ then. Let’s hope this no-bad thing is a trend I can continue into 2010!

Now this might be a little contentious, and I might simply be worrying about nothing much at all but… the photography isn’t doing as well as I’d like. I mean, technically, I am getting better with every frame I shoot. My digital darkroom process is, in my opinion, one of the best out there. It sounds big-headed, but it’s rare that I see a photo that impresses me more than my own. It does happen of course — but… I am not as amazed by commercial, successful photographers as I ought to be.

I look at magazine covers and shrug. Editorial photos… hit and miss. Even the old standard, the music magazine front covers… mediocre. There are still some stand-out photos of course, but they are rare. Why don’t I have their job instead?

And then I look at a frickin’ copy of the National Geographic. I think, in total, over 10 years of reading NG, I’ve seen about five bad photos.

I’m lumping this one under ‘ugly’ because I’m simply not sure if I’m doing well or not. I have an optimistic feeling that my photographic efforts will pay off in 2010, but there’s a chance it won’t happen for years and years… and that’s something I should be prepared for!

I didn’t pick up a camera to be famous or successful though. I picked up a camera eight years ago because I wanted an excuse to push me outside, away from my computers. If I was still only measuring myself by that meter, it’s been a resounding success. Unfortunately, I’ve now had a taste of just how good I could be as a photographer… and now I want to be BIG.

I think I’m done here. But something might pop up on Thursday, we’ll see!

18 of 52
New year's resolutions, or why failing is not an option