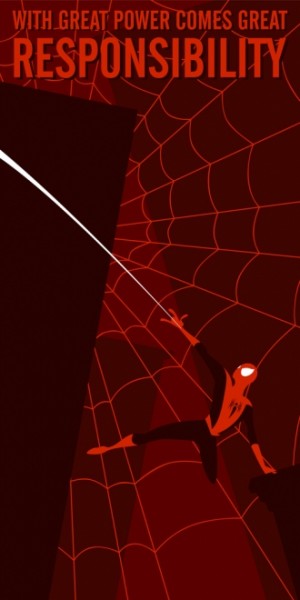 What if a strong breeze knocks the trash out of your hand and onto the ground, and blows it away? What if your eyes are drawn away from the road by a drunk and naked college student standing by the roadside? What if something more important came up that caused you to skip the obligation — a family emergency for example; your mother broke her leg, or similar. Are you still responsible for the littering, car crash or failed obligation?

Put it another way — can you blame that strong breeze for the littering? The drunk student for the car crash? Your mother’s broken leg for the broken obligation?

Generally the argument goes something like: we should all just take a little more responsibility. If we all picked up each other’s discarded trash, the world would be a better place. But it’s hard in the second example: should drunken college kids stay away from roadsides or other places that can distract people?

Shit happens then, whether we like it or not. It’s not worth getting our panties in a twist over something outside of our control. There are some people that can’t sleep at night because of outside influences acting upon them. There’s a disparity here: how much should we be responsible for? Ourself? Ourself and our family? The entire world? Do we draw the line at being responsible for other people’s actions? If your boyfriend dumps you, do you take responsibility for that — perhaps unfairly so?

How much can we actually be responsible for? Some people can’t look after themselves; while others draw the line at just themself and nothing more. Then there are those that look after entire families or multi-national corporations. Imagine being responsible for the power grid, or food cultivation and distribution. (Is the president a very responsible person?) How about channels of communication? If the postal service goes on strike, who’s responsible?

What about the Internet?

If I pull the plug on the modem and computer in my house, that’s my responsibility, even if it impacts someone else (maybe they want something that’s on my computer). What if an ISP (an Internet Service Provider) pulls the plug on an entire city? Are they allowed to do that? What if an entire country is simply unplugged? Whose responsibility is that?

We’re dealing with something nebulous now: communication. Usually responsibility refers to something quantifiable — you must keep some kids you care for from harm; you must till the fields so that there is a harvest; you must drive carefully so that you do not die or kill others. But how does communication fit into that?

The real-world example that comes to mind is Iran. Their government cut-off Internet access before a demonstrative rally. Is that within their jurisdiction, to be preemptively responsible? Where do you draw the line between responsibility and tyranny? What is the right amount of responsibility for a government to have?

Take the flip-side: if a nation is broadcasting propaganda, is it OK to cut them off from the Internet, for the greater good?

If there was a computer virus only in the United Kingdom, would it be OK to cut ourselves off from the Internet, to prevent it spreading? Who has enough responsibility to make that decision? The president? The private owner of the network? The inventor that made the Internet possible?

What we have here is the intangible responsibility of technology. It’s intangible and odd because technology is merely a tool — something that is at the beck and call of its human creator or user — in gun crime, we rarely blame the gun. But think about it: a car has responsibility to get you from A to B; a toaster must toast your bread satisfactorily; when you push a light switch, it better turn on. Whether we like it or not, a gun has to shoot when you pull the trigger. This ties back into the ethics of technology and the killer robot: is it ethically wrong that the Internet can be turned off for an entire country? Should guns or cars or toasters have remote switches that can be toggled off by the president of a nation?

We decide, via democracy, to place people in positions of power with vast amounts of power. We also push technology, via consensus, peer pressure and social adoption, into a position of power: The Internet (and the gun, the car, the toaster) reigns supreme only because of our reliance and continued use. Taking the Internet away is a bit like withdrawing clean water or electricity — but we can’t quite appreciate the scope of that yet because it’s so young, so nascent and only two generations have lived with the Internet in their lives.

Responsibility literally means ‘answering to your actions’. Think of how many of your actions have been made possible via technology: those flights abroad, the photos you take, the last-minute Christmas shopping you do online. It is vital that we understand the responsibility that technology has in our lives.

It’s vital because the Internet is just the beginning. Soon we’ll be asking questions like ‘can science be held responsible for genetically engineering our children to be beautiful and free of defects?’ — in twenty years, when a disabled child is born, whose fault will that be?