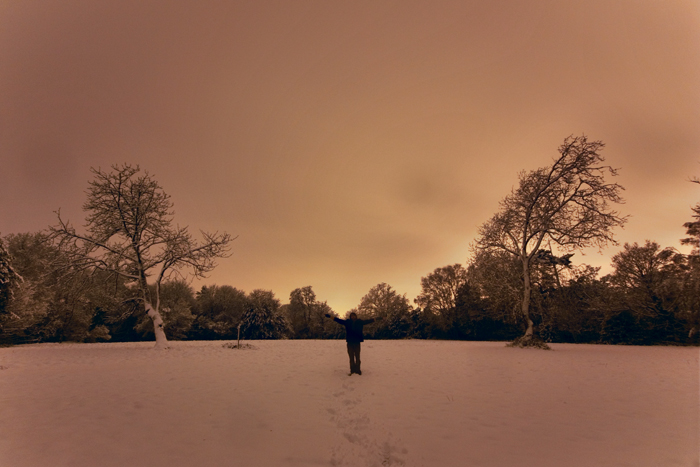 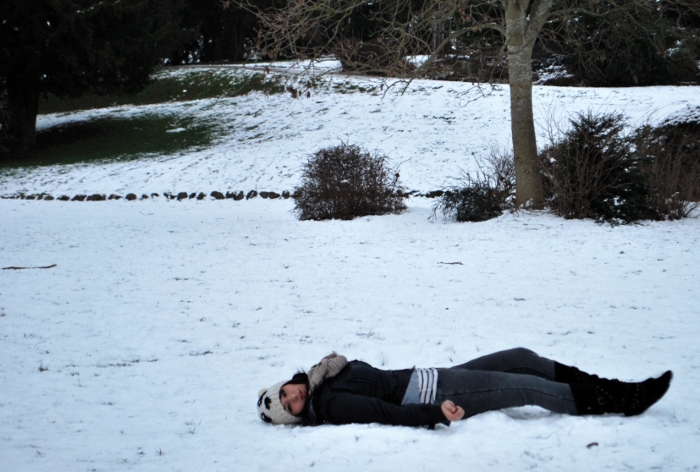 Seb: Believe it or not, it’s 4:15am in this photo. That’s not dawn either — that’s light from a city about 10 miles away. The colour itself is light pollution I think (though remember, this is long-exposure, so it wasn’t THAT orange, but definitely a bit orange). Look how still I held my arms for 30 seconds! (I’ve had a lot of practice over the years…)

I’ve been waiting all week for the perfect conditions for this photo. I bet you’ve never seen a landscape like this before… and neither have I!

The snow continued after this photo, and we’re currently under about a foot (30cm) of snow. There’s been snow on the ground for two weeks now — the coldest and snowiest winter in history I think, or certainly since I was born. And get this, our heating is broken because oil doesn’t flow well when it’s cold. Wonderful.

Abi: Whenever I look at this I am forcibly reminded of one of those Greenpeace ads involving a clubbed baby seal. Maybe it is the Panda hat, it gets a fair bit of attention and not in a good way.

Anyway, as you may have gathered, the UK is experiencing conditions which we as a nation are simply not equipped to deal with. Our transatlantic chums must bear in mind that when it snows, or excessively rains, or gets a bit warmer than we were expecting, our entire country grinds to a halt.

We simply don’t get much practice in dealing with any extreme weather and so, when it does happen, we either pretend it is not happening or battle on with the kind of camaraderie last seen during the war years. That’s what we Brits do, we queue and PANIC BUY.

The original concept for this shot did not involve me at all. Put simply, my friend flatly refused to lie in the snow for any length of time which is why I ended up doing it. This project may just kill me yet.