The snow has melted! The sun is… almost shining! The ambient temperature is WAY above 3 centigrade (37F) now and heading towards a balmy 5 or 6. Soon the delightful showers of Spring will be upon us — and before I know it, April will turn to May. May, if you’re new to this blog or my life, is the month when everything happens — we have something like 10 immediate-family birthdays in May, and this year we also have a wedding! May is also the best month to be in England (potential tourists, take heed!) The weather’s fresh (with a hint of the warmth to come) and the late-Spring flowers begin to bloom. The bulbs of March and April fade away to be replaced by the delicious lime-green leaves of May and all in all it’s just lovely.

But once May has passed, when all the important bits are out of the way and the best of British has been devoured, it’s time to fly. (I tried to work in ‘gonna fly now’ from Rocky, but failed — it just made me sound like a gangster-homie.)

It’s time to discuss where I’ll be travelling in 2010.  A few months ago I got lucky and scored a very well-paid writing job, so by the time May rolls around I should have enough money to go just about anywhere and do just about anything. It’s quite an exciting prospect! I can actually go on tour. When faced with a shanty, shared on-its-last-legs taxi, I can opt for the personal driver and tour guide. I can pay for the company and pleasure of not one, but nine concubines. Basically, this year, I have options.

First, though, I have to actually choose where to go. It’s time to get out of the Western world; out of Europe, out of America — but into … where exactly?

I have the plans for two primary tours bouncing around in my head at the moment: East Africa and East Asia.

BRING OUT THE MAPS! 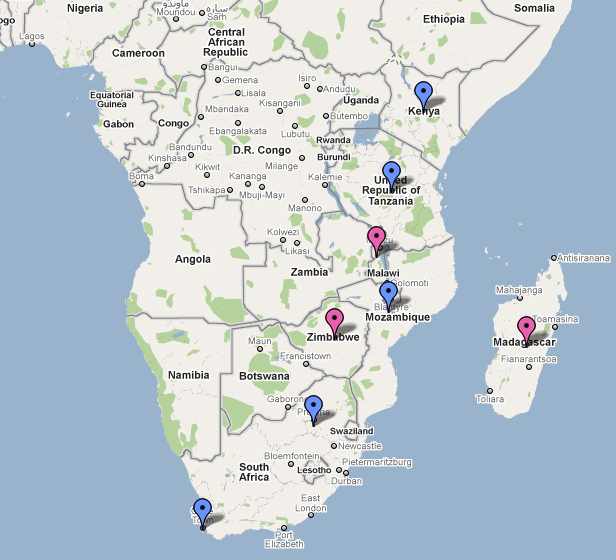 Via (uncertain): Zimbabwe (safer than I thought), Madagascar (bit out of the way, but safe), Malawi (safe, just not sure about)

Synopsis: East Africa is the safest part of the continent, which is obviously a huge bonus. Most of the countries on the list are also ex-British colonies, which means you’re generally safe and/or revered as a white tourist. The only real risk is being mugged, but being 6’5″ and scary lookin’, that’s not normally a problem. Other risks are Muslim extremism (but this is more of a problem further north, towards the Red Sea) and malaria. Really, I was quite shocked to discover just how safe my East Africa Tour could be.

Sightseeing-wise, Tanzania and Kenya have some of the best nature reserves in the world. Madagascar must surely have some unique vistas/plants/animals too. I have friends in South Africa and some connections in Tanzania. The only bit I’m not really sure about is Zimbabwe — but apparently it’s on the ‘safe to travel’ list again, so… we’ll see!

I don’t know which direction I would go in — north to south or vice versa. Need to check flights and connections. 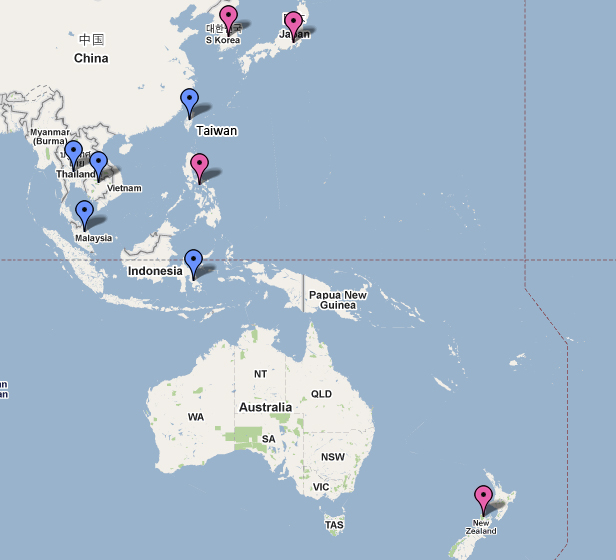 Synopsis: Now this one’s a little more tricky and much more time-consuming! Africa’s just a few hours by plane, but Singapore is 12 hours away — as is the ‘hop’ from Japan to New Zealand! South-east Asia requires a lot of island-hopping — I don’t think the domestic/small-hop flights will be expensive, but getting to and from airports is always a pain. I could always limit my trip to just south-east Asia, dropping Korea and Japan entirely… but still, how do I get to New Zealand and back again? (I could fly to Los Angeles…)

Safety-wise, Asia’s on par with east Africa, but there’s more risk of terrorism. Tap water is undrinkable, there’s some malaria, some tuberculosis — less HIV than Africa though, hooray! It’s tempting to do a ‘super safe’ tour to Japan, Singapore and New Zealand, but again… it would be an awfully long trip at great expense. I think I’d rather do a grand tour of just China.

If I did the entire circle — perhaps flying into Japan, and then going anti-clockwise? — I’d be looking at 3 months at least I think. I’m told you can lose yourself for weeks in New Zealand. As a photographer, I’m sure that’d be an understatement.

Gods, the more I think about it, Asia needs to be cut up into smaller slices. North Asia (Japan, Korea, China?), South Asia, and then New Zealand and the ‘wonders’ of Tasmania.

I’m leaning towards the East Africa Tour simply because it’s easier to execute. It’s linear, with the only required flight being the one to Madagascar — for the same reason it would probably be cheaper too. Actual cost of living/day-to-day expenses are probably very similar — most of my money would go on tour guides, safaris and other excursions.

Africa’s also closer to home, which makes the whole thing a little easier to swallow. One thing I need to look into is relative English literacy — I assume it would be better in ex-colonial Africa.

Asia has culture though — those Far East cultures! The seat of ancient-and-then-modern religion! I bet Asia has better views too, with all that sea… and jungle! I’d have to include the Congo in my African tour if I wanted jungle, and it’s not very safe there at the moment.

This is the bit where I throw the floor wide open for suggestions — I don’t expect much advice/info re: Africa, but you might have something to say about Asia!