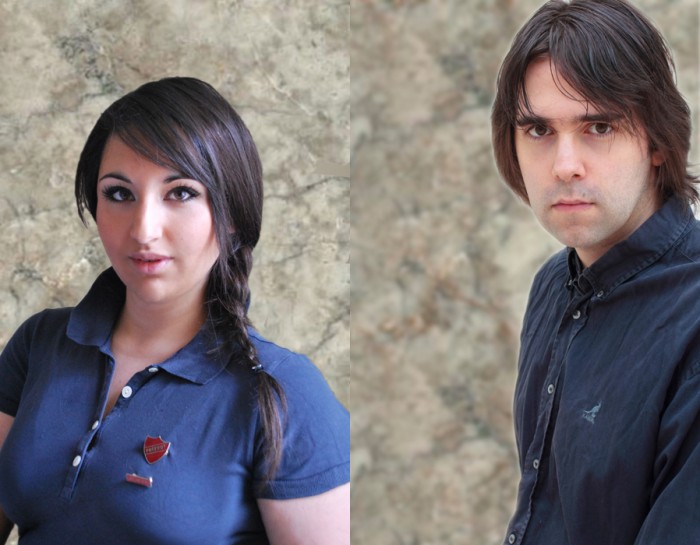 Abi: Apparantly he did this face for about 5 years straight and didnt wash his hair for three of those.. Incase you wondered, this week we visit each other aged 16.

Seb and I have only known each other about a year. God knows how long he’d been stalking me prior to that (I jest!). I think its fair to say that he is one of the people I talk to the most frequently, because of that it often feels as if I have known him longer. I believe people come in and out of our lives for a reason, sometimes they never make it that far, because the timing is off, you weren’t susceptible to their charms or you just plain never noticed they were there.

With some people it is hard to imagine their life before the point you entered it, which is slightly self centred I admit. If, like me, you have a tendency to measure time in terms of infinate alternate possibilities you can’t help but wonder what would happen if, say you met them sooner. Would you even like them at all? would you even notice they were there?

To be honest, I was too preoccupied with my commitment to Leonardo DiCaprio to notice boys nearer my own age. Having said that however, I am led to believe that Sebastian had “curtains” which may have been rather promising. Though I have no physical evidence of when he started to “get tall” i’d imagine it occured early, something the 16 year old me would have found intimidating for sure, I probably stopped my growing when Seb started his!

Seb freely admits he is a loner, its his thing. He was probably developing this trait early on, so I’d guess he had little interest in some oddball motormouth like me. Unfortunately this is not a conclusion I have reached myself, its something that I have come to learn about him through various conversations. I can however conclude that if his current interests were indeed fully formed or even in their fledgling state at sixteen then we would almost certainly have got on in some ways.

Though I strongly doubt if either of our 16 year old selves would have had the confidence to collaborate in quite the same way we do now, I like to think that the seeds were sewn. Somehow I can’t imagine this project continuing without the intervention of technology, which has really made all this possible, nor do I believe either of us had the ability to apply ourselves in the way we do now. Would we be the same friends then? Probably not. When I was in the art block, he was probably in the computer room… it’s all a case of timing, you see.

The ten-years-on version of this person that I have come to know is argumentative, probing, calm, fiercely intelligent and tightly wound. He calls me on my shit probably more than the Abi of ten years ago would be able to handle but this is something I am grateful for. Perhaps ten years is just how long it takes to come across someone who gets it like you do.

And grow a beard.

I just wish I had my prefect badge. Did you know I was a prefect at school? Just for a short time, to prove I could be. Turned out there isn’t much point in being virtuous merely for the sake of being virtuous.

The last year with Abi has been a weird one. In a good way. Incredibly educational — strenuous, but informative. If you know me, you’ll know that I value knowledge and wisdom above all else — and Abi is, underneath it all, very wise. The kind of wisdom that only comes from living every facet of life.

I feel like I’m playing catch-up when it comes to adulthood.

Even at the age of 16, I can imagine Abi was more adult than I am today. Back then… Christ, I was some weird androgynous amalgam — but not angsty, thank God. I had no taste in music… or girls… or food… but not by MY CHOOSING. I was subverted into becoming something very not-me.

I can’t imagine Abi was ever angsty either. Shy, I think. Aware that she was faaar more mature than anyone else her age; worried that her highly-evolved tastes and stances and viewpoints didn’t quite fit with her peers. It’s hard to say though — so hard to see past the present Abi that I’ve worked with this year. She’s shy around me… but… who knows?

One thing I often wonder about Abi, as she’s never told me, is whether she had boyfriends when she was a teenager. I wonder if she found anyone that tickled her in the right way? Are teenage girls as picky? Was teenage Abi picky? She certainly wouldn’t have been interested in me, the lanky, curtained kid.

It’s slightly disconcerting to think that she’s probably been on top of her game, mature, adult, since she was just a wee teen. In comparison, I am a neophyte! Growing fast, but still young and inexperienced. She’s one of the few people that almost leaves me struggling to keep up — maybe that’s why it’s so fun to wind her up. She’s not used to being tripped up. She tries to get up! But… there I am again… and again.

The politicizing of education, its failures and how to actually reform
When I was 16... I looked a bit like Severus Snape