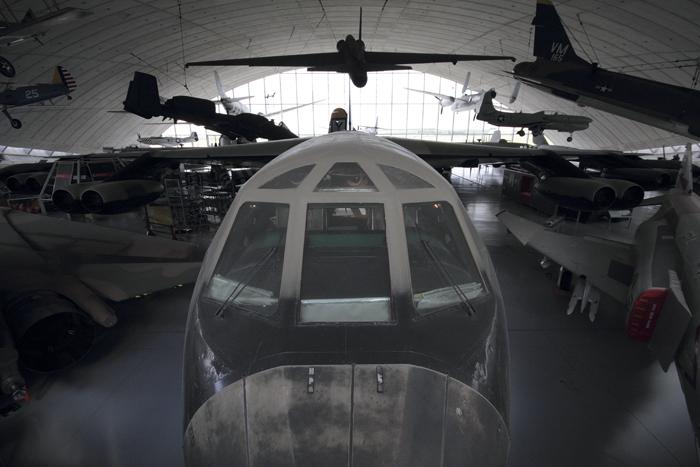 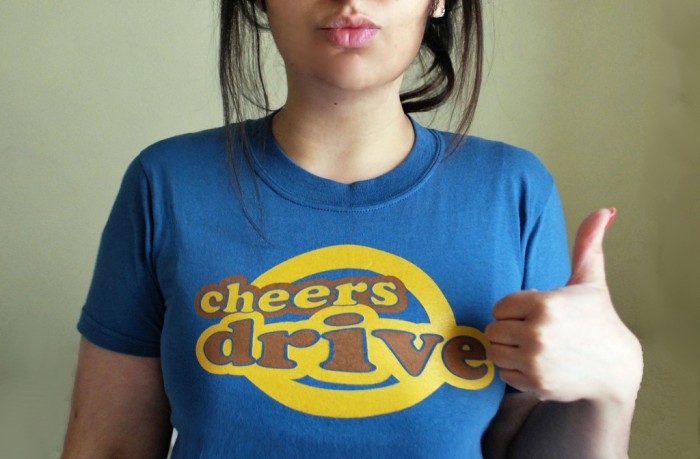 Seb: The B-52 is monumentally large. Sure, I’ve seen bigger things — Yosemite, the Eiffel Tower — but nothing that comes close in terms of beauty, efficacious engineering or the craftsmanship found in the B-52 Stratofortress. It’s just so damn cool.

Until yesterday I’ve never actually seen the machines of war up close. I’ve seen a Spitfire before, and some tanks… but apart from that, I’ve only seen them on my computer screen, or in the cinema. I had no idea how BIG our weapons are! The hangar you see above is JUST big enough for a single B-52 — and it’s an acre big! You can fit other planes under its wings! It has eight jet engines! Carries 180,000 litres of fuel!

You can probably tell that I quite like the sensation of being dwarfed. It doesn’t happen often, but when it does it’s so very satisfying.

* * *
Abi: Bit of an in-joke this one. My family will find this one particularly amusing, seeing as they questioned the existence of this tee.

As most of you probably know, I recently moved back to my old University haunt; The City of Bristol. Like many regions in the UK it has it’s own accent and colloquialisms. The Bristol accent is hilarious, comforting and friendly all at once. I don’t have a Bristolian accent, but I always grin whenever I hear it and can often be found imitating it. If you are familiar with Vicky Pollard from “Little Britain” I can tell you that that is no exaggeration. (Incidentally, that sketch is one that I can do by heart… I’m not sure if that is a good or a bad thing).

So anyway, the “Cheers Drive” thing is literally a Bristolian way of saying “Thank you Driver” when alighting a bus or similar. It is usually accompanied by a double thumbs up wherever possible but at the very least a raised hand and goofy grin which is a pose you must assume until the vehicle has moved out of view. This can often mean you are left standing there like a pranny while some delay occurs with the bus. A seasoned pro will be unphased by this and simply carry on grinning at the driver for however long it takes, as if mere words cannot convey the level of gratitude.
Whilst I was staying with my family in Australia, they found this saying in particular really amusing. It then got passed on to some South African friends and before the trip was over, everyone was saying it.

I urge you to leave the car at home today and do the same- Cheers Drive!

The real teenager!
Proportional, income-related pricing of art and media