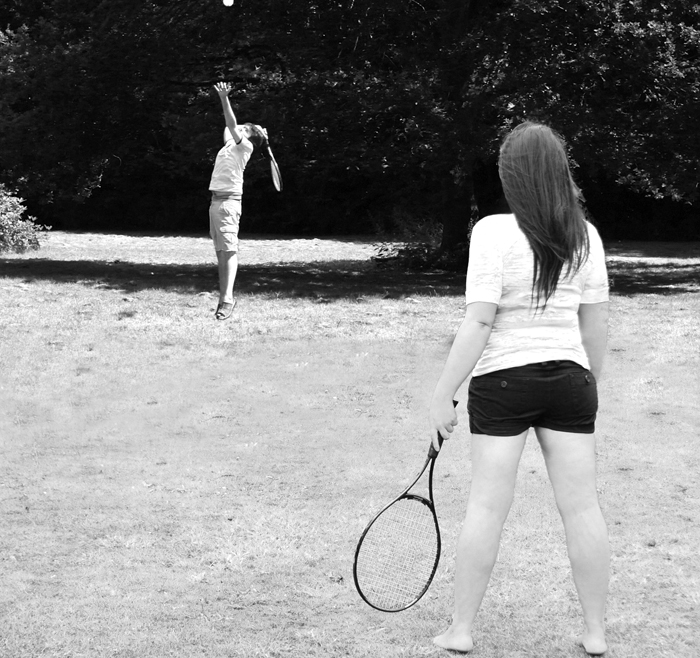 My eyesight, on the other hand, is not.

So I played until I could no longer see the ball — until balls started hitting me in the face. My dad, you see, is a cruel bastard who only counts body shots as points. Head shots were double. I played a lot of tennis with my father. It was worse than paintball…

I’m told it was quite funny to watch me play, in those last few months of failing sight. I could only swing my racket when I saw the ball, which doesn’t leave you much time when the ball’s travelling at speed. As a result I would just stand in the middle of the court, pensive, waiting to step and swing as soon as I saw the ball. Towards the end I didn’t even have time to complete a full swing, so I generally had to resort to short chips and spins and lobs.

So, as you can imagine, while I was pretty shit from the baseline, I was a pro at the net! It’s very, very hard to get a tennis ball past a 6’5″ (196cm) behemoth standing within a few inches of the net.

I’ve not played tennis since I was 16. I occasionally play table tennis and badminton — the smaller court makes it possible — but really I need to bite the bullet and just get contact lenses. Maybe this should be the year that I start playing tennis again!

Abi: I don’t think I have played a proper game of tennis since I was at University. I used to be quite good at one point, when I was younger I even had a coach. Tennis at school was always frustrating, due to my always pairing up with my extremely short-sighted friend. I am sure she won’t mind me saying here that I think she only returned a ball twice in about three years. Not the stuff champions are made of. I played on and off for years but really should pick it up again. There are courts just down the road from my house so there is little excuse. I’m sure someone will play me. If not I shall go and buy a Swingball (TM) you can still get those, right?

Tennis is still my favourite sport to watch though, I do miss going to Wimbledon and have been following on TV as much as I can. I guess everyone in the UK digs out their old school racket around this time of year and attempts a highspeed serve or two in the privacy of their own garden… I mean, look what it’s done to Seb! He is jumping.. that is an actual jump.