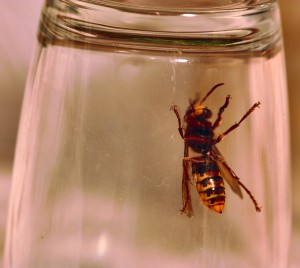 A couple of weeks ago I was contacted by someone I’ve never met before via Flickr. He had found my stream by searching for hornets and obviously liked what he saw, because he emailed me to ask if I had any more hornets that I could send him. Really, I was cold-called and asked if I could capture a hornet and send it across the country so that he could have his wicked way with its… antennae… and… mandibles.

He even told me how to deal with the hornet, once I’d caught it. ‘Freeze it’ he said. ‘Just pop it in the freezer for a few hours and then send it over.’

And so I did. Two weeks had passed, but last night a hornet flew into my room — and I flew into action! I cowered behind my door, biding my time, as always (I’ve been bitten by hornets before). Eventually he settled down on the woodwork of my sash windows and KABLAM! I struck, catching it ‘neath a cup. Then I murdered the poor bastard by putting him in the freezer. It was actually the first time I’ve intentionally killed an insect. I felt rotten.

Why though? Why did some guy want one of my hornets?

To draw it! He’s a frickin’ artist and an incredibly talented one at that. He likes insects (and collects and rears insects!) — and who am I to deny him one of my many hornets?

I killed, but it was in the name of art! Worse things have been done for creative ends.

I fly off to Montenegro on Wednesday. I’m aware that I still haven’t written much about it. It’s very hot and humid in England right now, and typing with sweaty fingers is horrible and laborious. But, yeah, Montenegro is actually a vacation for me. I will take some photos, but the primary purpose for this trip is to relax. It’s hard to describe just how mentally exhausting my current lifestyle is. I need to unplug for just a little while.