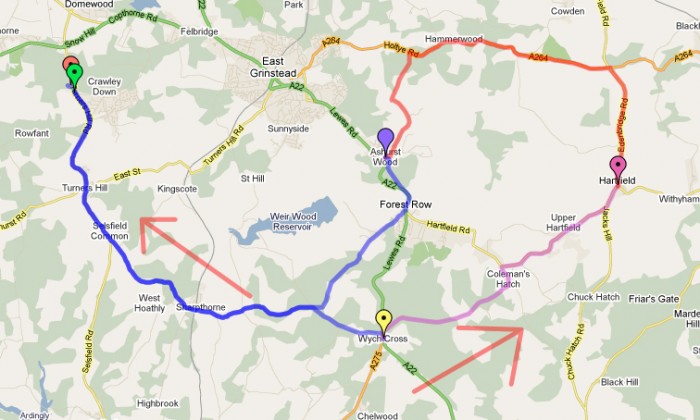 I just had my very first almost-car crash! It was very exciting, and I’m proud of my preternatural reactions that undoubtedly saved the day.

If you weren’t aware, I’ve been doing some late-night (after 11pm) drives on Fridays and some Sundays. The idea is to learn how to drive fast, and to do it when no cars — and no humans — are on the road. It’s been going well! I’ve even been plotting my trips on Google Maps.

Tonight, however, I almost crashed. I was going way, way too fast — I’d forgotten about an upcoming corner. Usually I just tilt the steering wheel into the corner and pray, but this particular corner is too narrow. I started turning in to the corner but very quickly realized I wouldn’t make it, so I re-adjusted and decided to plough straight ahead and floor the brake — much better to brake in a straight line than to flip the car on the corner, or spin and get hit by another car coming the other way.

Fortunately, I didn’t run off the road and onto the grass: there’s a gravel path off that corner — some house’s driveway — and so I aimed for that. I skidded a little, hit the curb slightly, and came to a stop about 30 centimetres from the house’s gate. Phew.

But then… I see a dog trotting towards me, across the house’s front lawn. By this stage I’ve opened the car door, ready to check the car for damage. The dog ducks through the fence, and jumps into the car. Well, he tried to — basically he tried to climb over me and failed, because he was a very, very large dog. Having failed to climb over me, he started licking my face.

This went on for about 30 seconds despite my protestations and continued “down!” calls. Eventually he backed off and I got out the car to look around; no damage, thankfully.

So… if that wasn’t weird/fortuitous enough, another car then pulls up. The owner of the dog! He’s German, and he’s looking at me very quizzically indeed.

“No… he climbed out… after my whoopsy…” (The German guy is obviously not getting what a ‘whoopsy’ is.)

Then he drives off, the dog follows, and I reverse out onto the road and finish my late-night rally drive.

I’m kind of grateful for the dog’s intervention, to be honest. I didn’t even get a chance to panic after the crash. Must be something to do with the restorative powers of being licked by a large dog.

Oh, I’m covered in mud, too! I have muddy paw prints all over my trousers… and my face smells of dog…