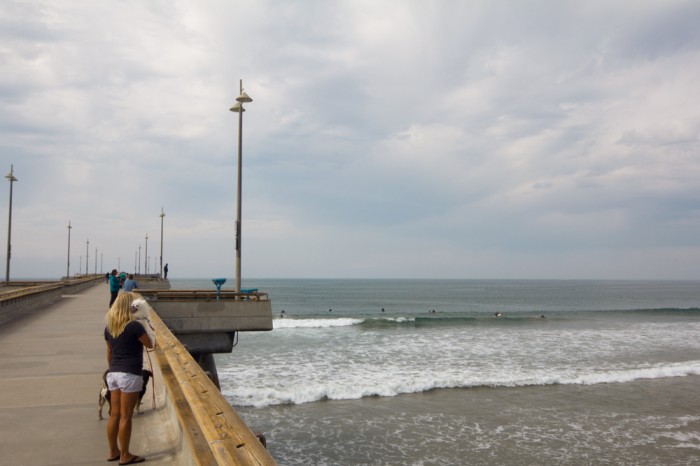 Again, as I write this, I am on a plane — but this time I am flying from Los Angeles to Newark, New Jersey. By the time I post this I’ll be at my ocean-front apartment in Ocean Grove. I’ll upload some photos from the wrap-around deck once I get everything set up. [The photo above is the Pacific Ocean -- I was there this morning... and now I'm on the Atlantic Ocean; cool huh? The photo is awesome for at least two reasons. See if you can spot them!]

LA — well, Anaheim and then Pasadena — was a lot of fun. The first week was spent at the Hilton Anaheim and the Anaheim Convention Center, covering Microsoft’s Build Windows conference for my writing job. For five days, I woke up at 6, wrote a couple of stories, and then hung out in the Press Room. I attended a couple of keynote speeches (both were very long) and a few sessions (not as exciting as I’d hoped). The rest of the time I wrote — or if it was after 5pm, I ate, drank, and partied.

Tech writers/journalists/bloggers (don’t you dare call a self-styled tech journalist a blogger!) are an interesting crowd. On a scale from 0 to -10 on the uncool scale, they’re around -7, just ahead of table-top role-players (-9) and just below the horrific, more-pretentious-than-thou psuedo-middle class substratum of society (-5). Tech writers, once you get through the ego that results from being one of the select few that Microsoft invites to its events, are a surprisingly friendly bunch. They are just geeks, after all, and meeting like-minded geeks is one of life’s greatest pleasures.

Anyway, we partied fairly hard and did quite a lot of drinking. It all culminated with a night at ‘Oshimi’, a tiny sushi restaurant on a strip mall in the outskirts of Anaheim. Nine of us spent $1,000 on sushi. I’m not a sushi maestro, but it was certainly the best sushi I’ve ever had; Toro and Cherry Salmon were my favourites (my writing job means that my muscles have now memorised the American spelling of favorite, alas). The sushi was prepared by three wizened, octo- (or maybe septa-)generian chefs that looked like wrinkled, barely-erect corpses. We were waited on by a tiny, cute Japanese girl. She kept nodding and quietly squeaking hai at our sushi choices.

This past week I spent in Pasadena, which is north of Anaheim and east of downtown Los Angeles. As far as American towns/cities go, Pasadena is quite interesting — but compared to green and leafy Sussex, England, it’s horrible. Everything in and around the LA basin is soooo sparsely spaced. The smallest roads are four or five lanes, and most “surface roads” (as opposed to freeways) are at least six lanes — and each lane is at least 3 meters wide, because Americans drive insufferably obese vans and trucks. This means that each road, including a suitably fat sidewalk, is around 20 or 30 meters (65-100 feet) across. The result is a towns that are spread out over miles and miles, because so much space is taken up by roads. The sparse (and low-riseness) means that landmarks are almost non-existent, too, because you can’t physically see farther than a block (or less!) in any direction. The end result is an endless sprawl.

Still, Pasadena was nice. Pasadena is an old town, as far as west coast settlements go, and I enjoyed looking at all of the turn-of-the-century bungalos that dominate the side streets. I stayed in a 115-year-old “Craftsman,” which made it one of the oldest houses in town. My host told me that when the house was built the porch would’ve had a clear view of the mountains and miles of prairie… but now, of course, the house is just another denizen on an endless, 20-mile-long avenue.

On a more personal level, I am doing well. I am not enjoying this single-computer, single-screen thing, but when I get to New Jersey I’ll have a second display and a full-size keyboard waiting for me. Rather worryingly — and I had a hint of this when I went to Wales last year — my English accent seems to be sliding away from me. Or rather, people don’t immediately pick up on the fact that I’m British. I know my ‘proper’ accent has been slipping for a while — sitting in my bedroom only talking to European World of Warcraft friends is the cause, I think — but apparently I am full-on ‘mid-Atlantic’ now. It doesn’t help that my job requires me to write in American English, so I use mostly-American phrases and terminology, too.

Perhaps I’ll have to start podcasting again, or something. Or maybe I’ll have to phone a British friend for a few hours every week, just to polish up on my vowels.

In other news, I am probably gaining weight, but I don’t have any scales to prove it. There might be some in my Ocean Grove apartment. I hope my face doesn’t get all jowly again. Perhaps I’ll have to take up running… along the pristine, sandy beach that is a few meters from my front door.

* * *
I’ll be updating this blog fairly regularly — perhaps once a week — but you should look me up on Twitter or use Facebook’s new ‘Subscribe’ feature if you want a steadier stream of (somewhat funny) updates.

To America! (a week overdue)
The rigors of living alone