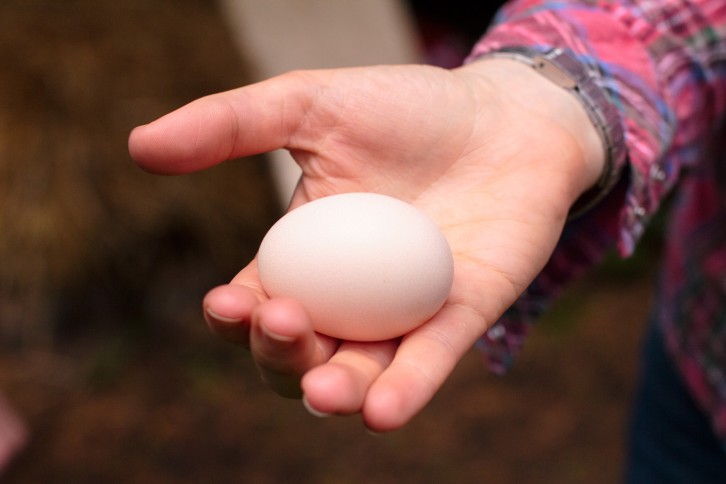 So, I’ve finally done two things that I’ve been endeavouring to do for the last five years: Visit Ireland, and get some egg-laying chickens. Let’s start with the chickens.

My dad and I have always joked about getting farmyard-type animals. First it was a goat, to ‘mow’ the lawn (you tether it in one location for a few days, it eats all the grass, and then you move the tether). Then it was a pig — a Vietnamese potbellied pig, to be exact — but they get too big, smelly, and unwieldy. Finally, chickens. I mooted the idea a few months ago, when I bought this end of the house, but neither of us did anything about it — and then, two weeks ago, my dad sent me an email with a link to a posh chicken coop… and I bought it. A week later, we went to a local chicken farm to get four chickens. 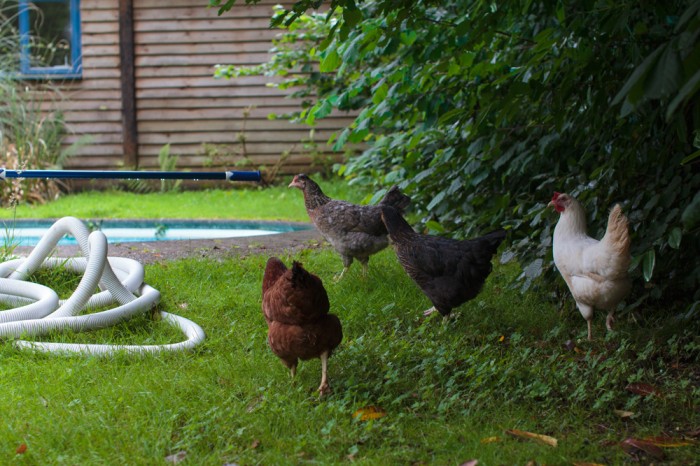 Maggie (white) is a Coral hybrid, Florence (ginger) is a Colombian Blacktail, Poppy (grey) is a Columbine, and Unknown is a Copper Black (some kind of Maran, I think, a French bird). I’m currently thinking of some kind of politically incorrect name for the Copper Black, like Martin Luther King or Winnie Mandela. Or a black location (like Harlem, Compton, etc.)

Maggie and Florence are currently laying eggs (cream and light brown respectively), but the other two are still too young I think. The eggs are delicious! 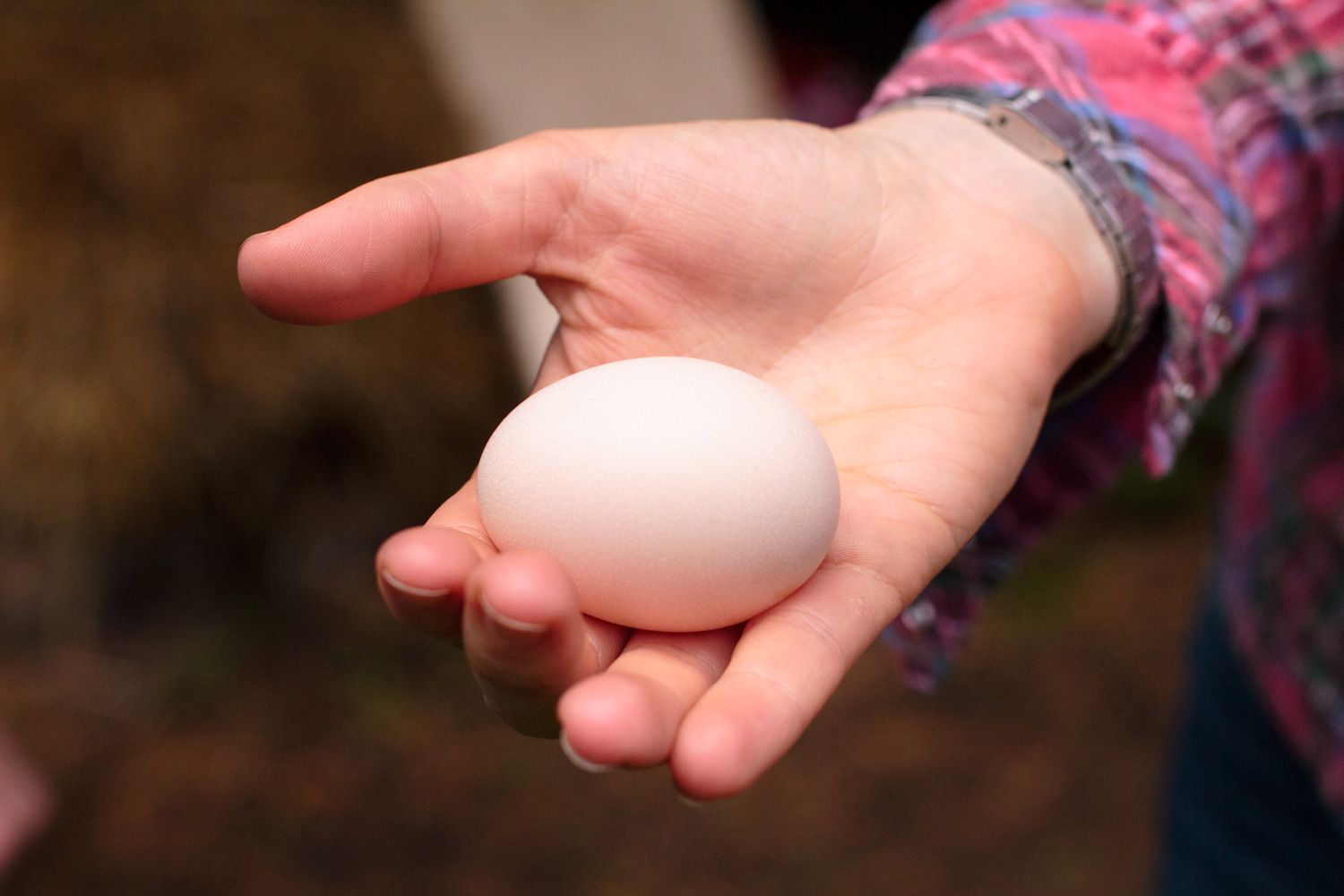 For the first week they stayed in the coop/run thing, but this weekend they were allowed to free range for the first time. Judging by the noises they’ve made and the hours they’ve spent rummaging in the mud beneath our big trees, I think they’ve been enjoying themselves. We lost them earlier today — they’d gone half way up the drive and about two meters into the hedge/treeline. Had to go behind them and bang a pan to rustle them out.

Anyway, as I seem to be running the risk of turning into the farmyard equivalent of a mommy blogger, I should probably stop there.

Ireland! (You definitely want to click to see the full-size version of this photo.)

Just like my semi-infatuation with farmyard animals, I’ve always talked about going to Ireland and Scotland, but never actually been. I always thought it was a bit sad that I’ve crawled through ancient caves in Cappadocia, Turkey and hugged giant redwoods in Yosemite, but never seen the Giant’s Causeway or Ben Nevis.

Anyway, I received an offer I couldn’t refuse to visit the south west of Ireland… and so I went! And keenly!

The first two days, we had lovely weather. The second two days, there was so much fog, mist, low cloud, and rain that visibility generally ranged from 20 to 200 meters. But the food was good, the company was excellent, and what we did see was very pretty. Take Fungie, for example — a friendly dolphin who has been a resident of Dingle Bay for almost 35 years. He never leaves. His only friends are the hundreds of tourists who come to see him every day. 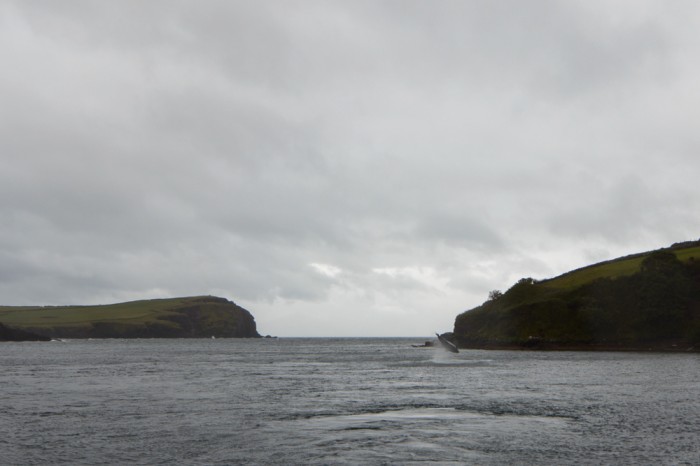 With all of the bays and inlets, the west coast of Ireland really reminded me of Norway and the Faroe Islands. I almost could’ve shot these two photos in the Faroes: 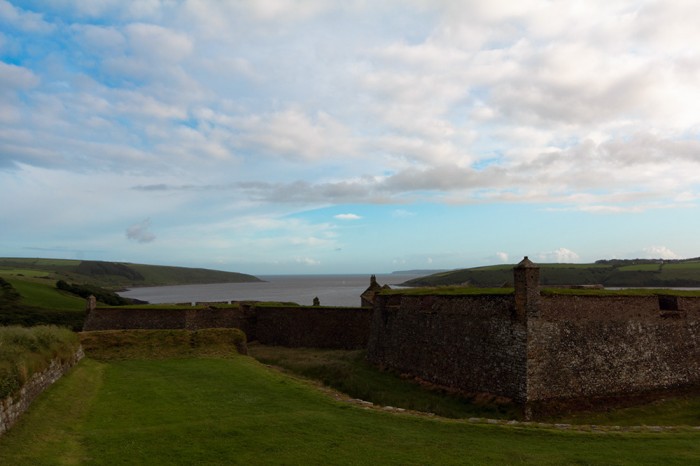 On the other hand, this is all we could see of the Cliffs of Moher, a few-mile stretch of cliffs that overlook the Atlantic Ocean and the Aran Islands. The Cliffs of Moher are, like, the number one tourist attraction in Ireland. I felt rather bad for the Asian tourists who had travelled thousands of miles to be greeted with a blanket of fog. At times, the cloud cleared just enough to see the outline of the nearest cliff. Really sucky. 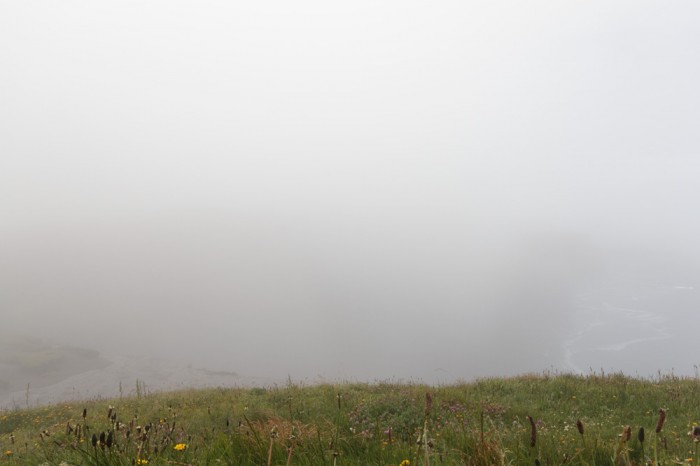 This is what the cliffs look like on a good day: 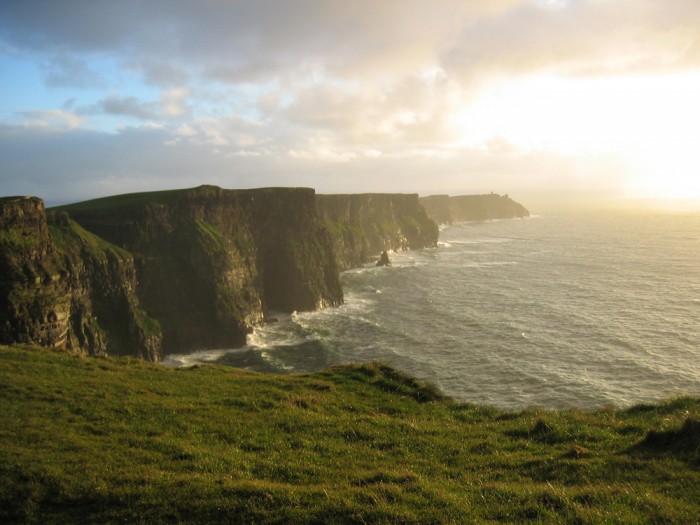 Other things I did in Ireland, in no particular order: Ate my first mussel (as part of a seafood chowder thing); Received enough inspiration that I may have to update my Best Places To Have Sex guide; Watched the Euro Cup 2012 final from a swanky hotel suite; (Almost) did a doughnut on a beautiful beach; and… I went to a drive-in cinema!

So cool — it seems they’re experiencing some kind of renaissance at the moment, or something. You just drive into this big car park, face towards the screen (some kind of massive white sheet hanging over a scaffold tower), and tune your radio into a specific FM frequency. Voila! It was pretty cheap, and you can bring your own snacks, and obviously you can make out and stuff. It felt very… 1950s America.

The people in Ireland were very friendly. I’d definitely go again (especially to the north, to see the Giant’s Causeway).

As for general travel plans and other real life stuffs, I don’t have anything on the agenda for the rest of the year. I have a cool business plan up my sleeve that might require all of my attention for the next few months. The house is looking cool, but still unfinished. Writing is going well, though I don’t know how long I will find it enjoyable. I love writing — and I love people reading stuff that I write — but out of the 50 hours I work per week, I probably only write for 20 of those.

I think that’s about it for now! I need to go make sure the chickens are all cooped up for the night. There’s more photos on Flickr and Facebook of the chickens and Ireland, if you’re interested. 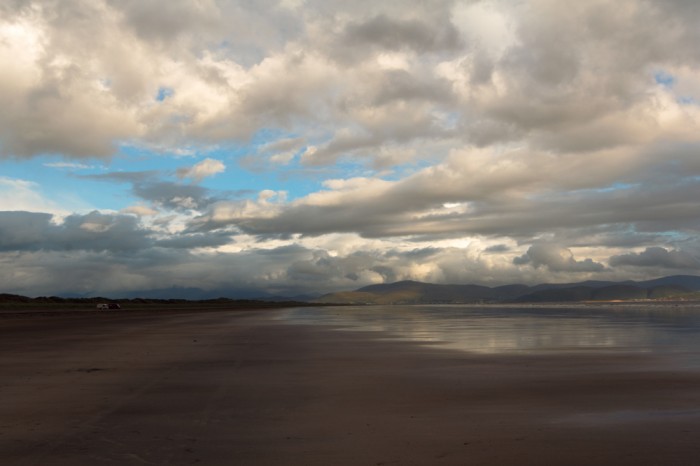 This month, on Seb’s blog…

My life: Decorating, cleaning and writing
Balloons and Bruges