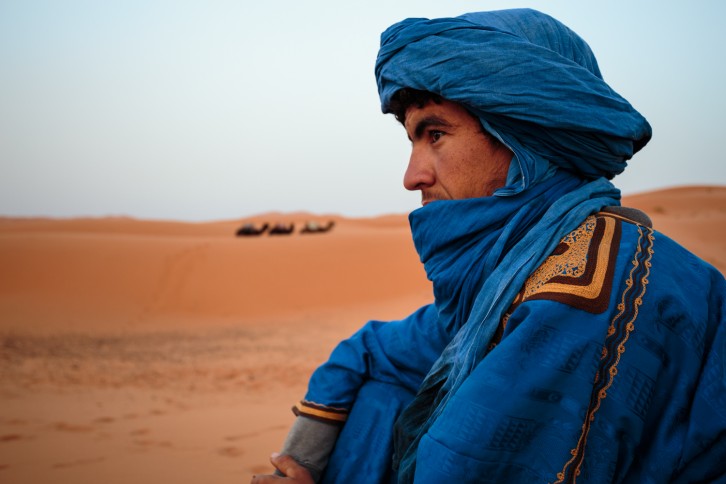 For the last 12 months, I have been doing almost everything with a girl called Shannon. By “everything” I do mean everything. It started off with chatting, and then a few weeks later flirting, and then, as is the natural progression of such things, eloping. We followed that up with eating, travelling around Europe, drinking lots of alcohol, exercising, watching awful TV, and being caught by the police for a crime that we (arguably) didn’t commit. Then, of course, to check off another box on that “everything” list, we broke up. And kind of got back together. And then broke up again. And then we spent Thanksgiving together, deep fried turkeys in dangerously large vats of oil, shot squirrels with air rifles, and maybe got back together. Really, in the last 12 months, we’ve done everything.

Unless I note otherwise, any mention of “we” over the next few days/weeks/years refers to the lovely Miss Shannon. 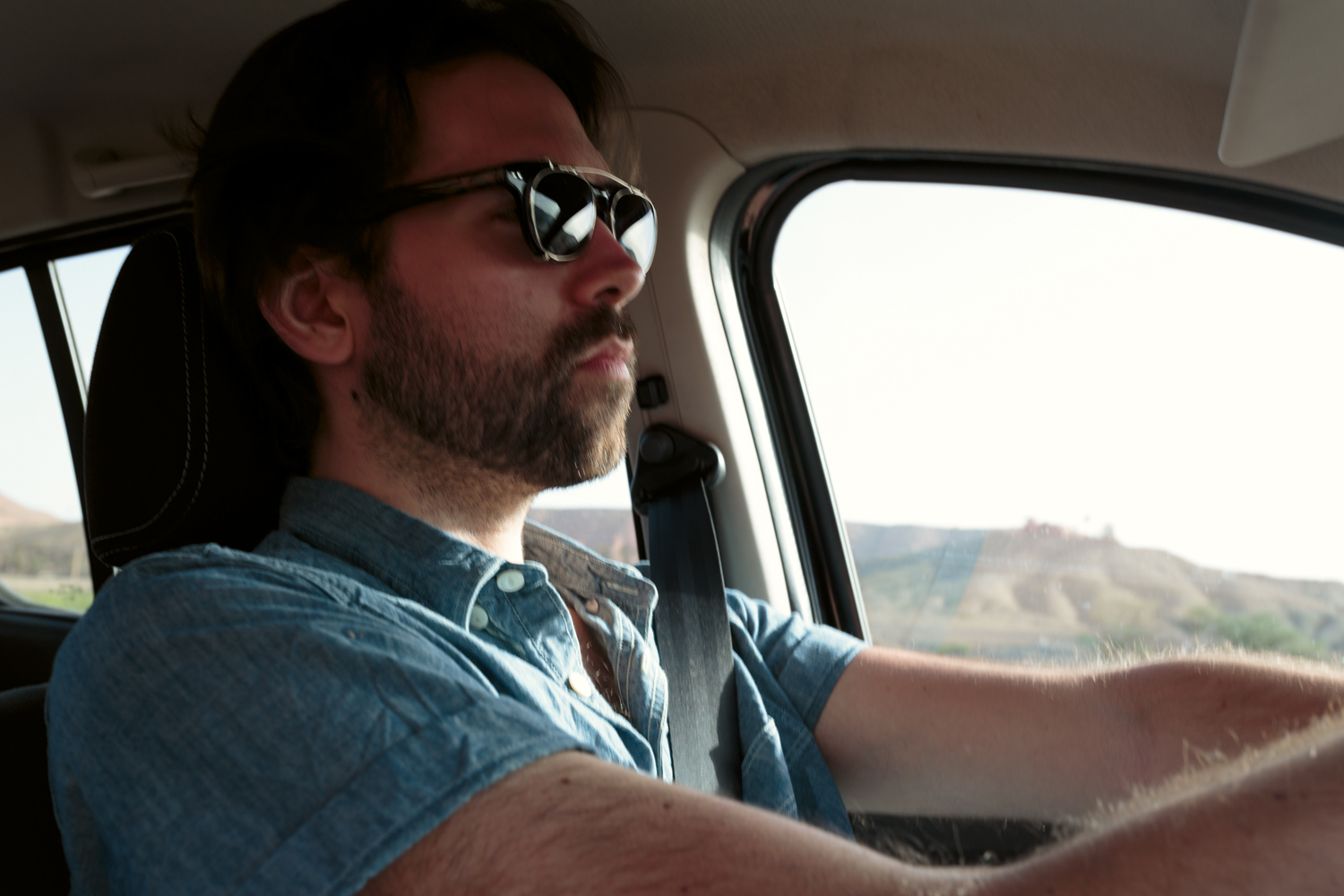 Me, driving a rental car, somewhere in the Moroccan desert

Marrakech to Merzouga and back again

In April 2013, we found ourselves visiting Morocco for a week. Rental cars in Morocco are not like rental cars in the US or Western Europe. Our rental had 80,000 miles on the clock, no AC, and the wimpiest 1-litre diesel engine I’ve ever had the misfortune of driving. (If you can even call 0-60 in 20 seconds “driving.”) As luck would have it, we would also wake up on the third day of our holiday to find that the car, because we paid for the premium package, had a dead battery. Driving 100 miles to Marrakech when you have a flat battery and limited functional use of French was a little bit tricky, but with the help of our lovely host in Essaouira (Jorge at Dar Skala), and my strangely successful attempts at communicating with a mechanic in terms of milky coffee and pastries, we finally got the car started with some jumper cables. Three hours later, and after some difficulty navigating Marrakech’s medina, we made it to our rather grand haven amid the madness: Riad Dar Palmyra.

There are a lot of stories to tell about Morocco, but first I’ll tell you the story of how we drove from Marrakech to Merzouga, rode a camel into the Sahara desert (probably the most painful thing I’ve ever done), ate and partied with Berbers (pictured top), slept in the Sahara on a camel-hair mattress in a Berber tent, rode a camel back to civilization, and then drove back to Marrakech… in two days (about 32 hours, to be exact). 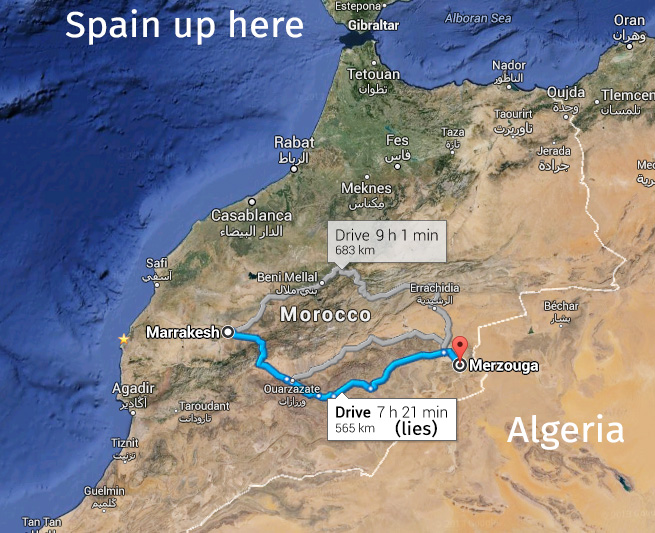 Marrakech is on the west side of Morocco (which isn’t a small country), and Merzouga is in the east, on the Algerian border, about 350 miles away. Google says you should be able to do the trip in seven hours, but because the 100 miles between Marrakech and Ouarzazate (wah-za-zat) runs through the Atlas Mountains, the journey is nearer to 10 hours. Once you pass Ouarzazate, there’s basically nothing but desert for 250 miles — six hours or so. The roads were generally in good repair, though, and except for getting stuck behind trucks in the Atlas Mountains you can generally make quick, safe progress. Unless, of course, you get regularly pulled over by the police, like me. I’ll tell you more about that, and sharing the road with goats, mopeds, cyclists, buses, trucks, cows, cars, and crazy taxi drivers, in a future story called Driving in Morocco: A is for angry, B is for bastard, C is for corrupt police. 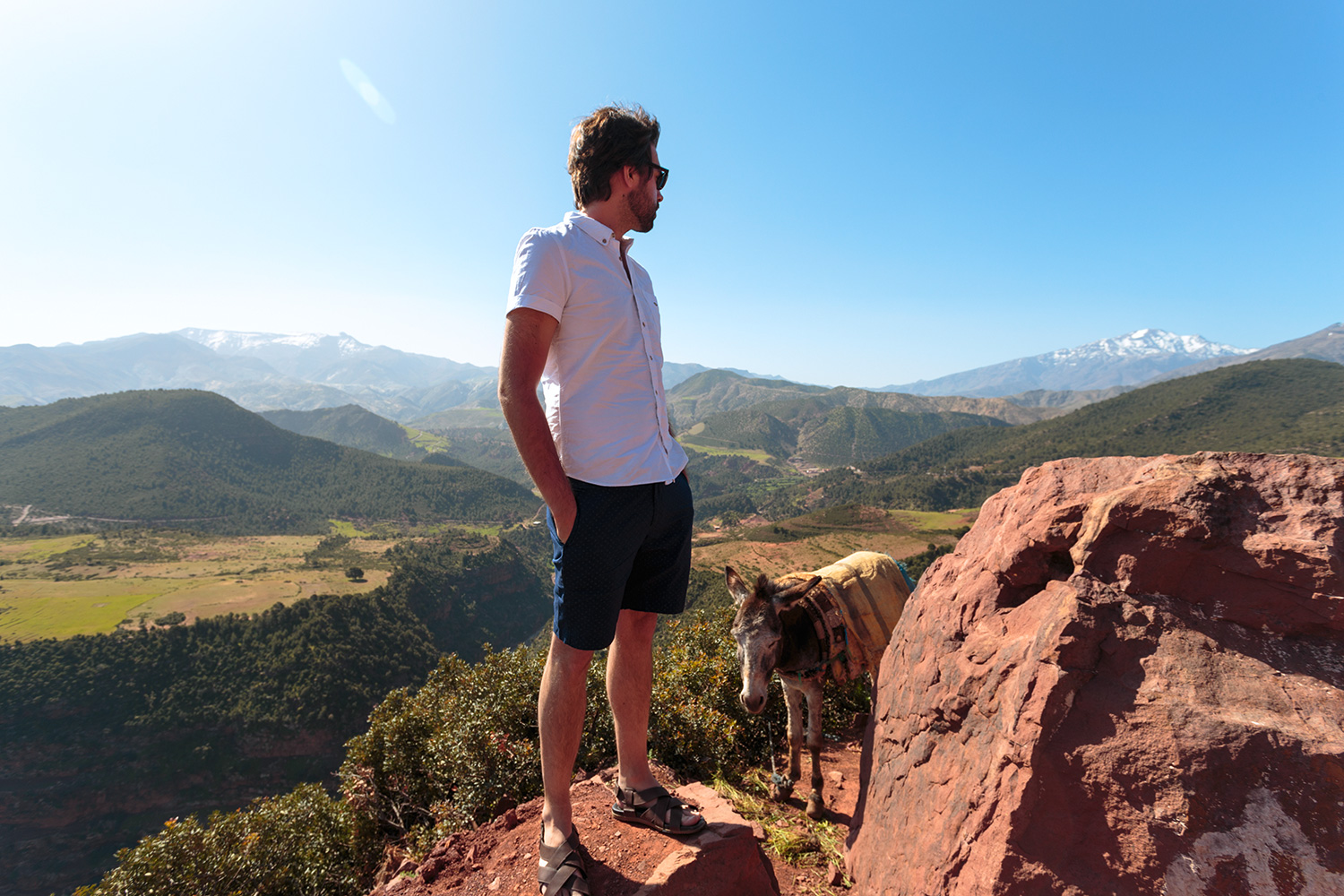 Me, in the Atlas Mountains, Morocco, with my new friend 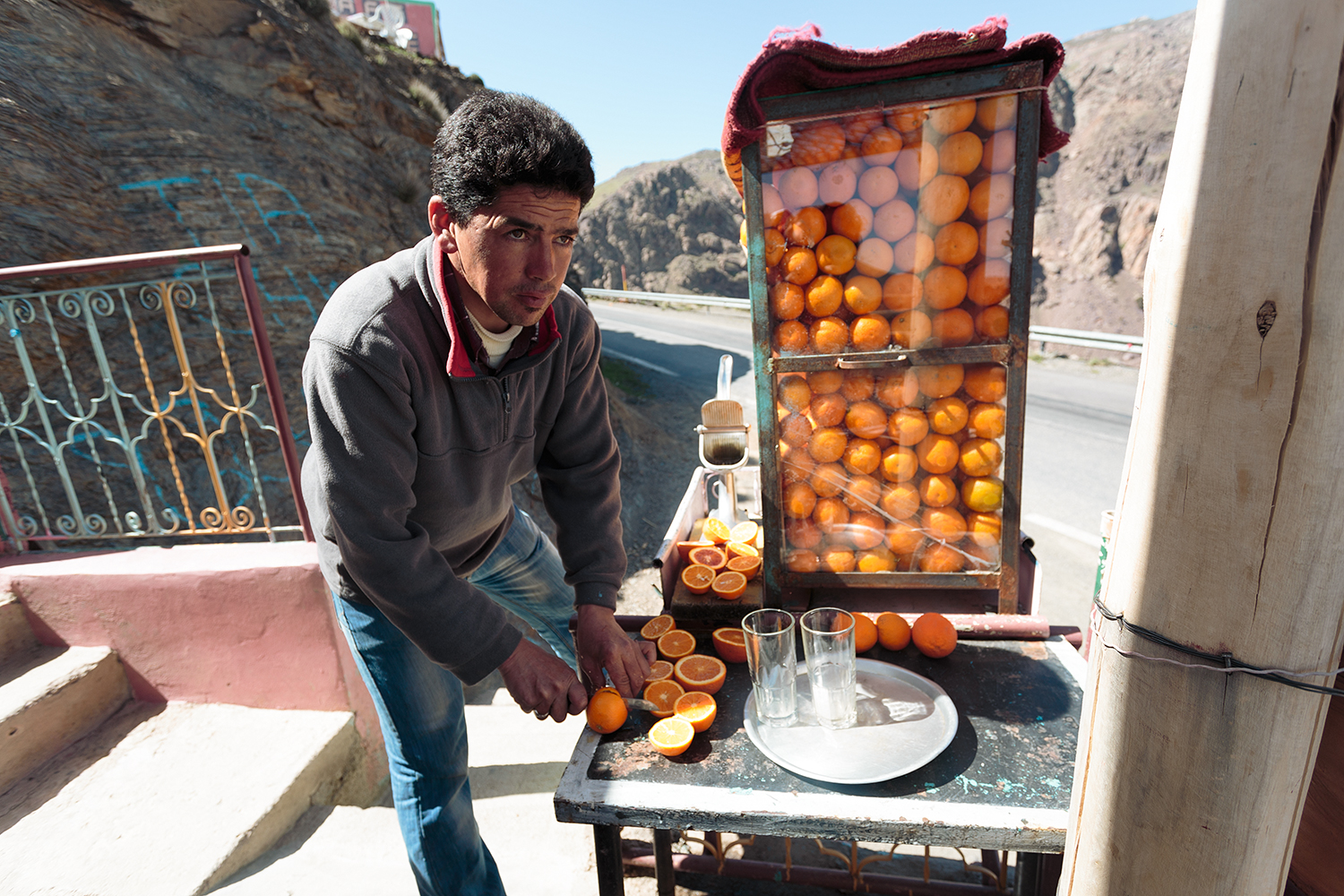 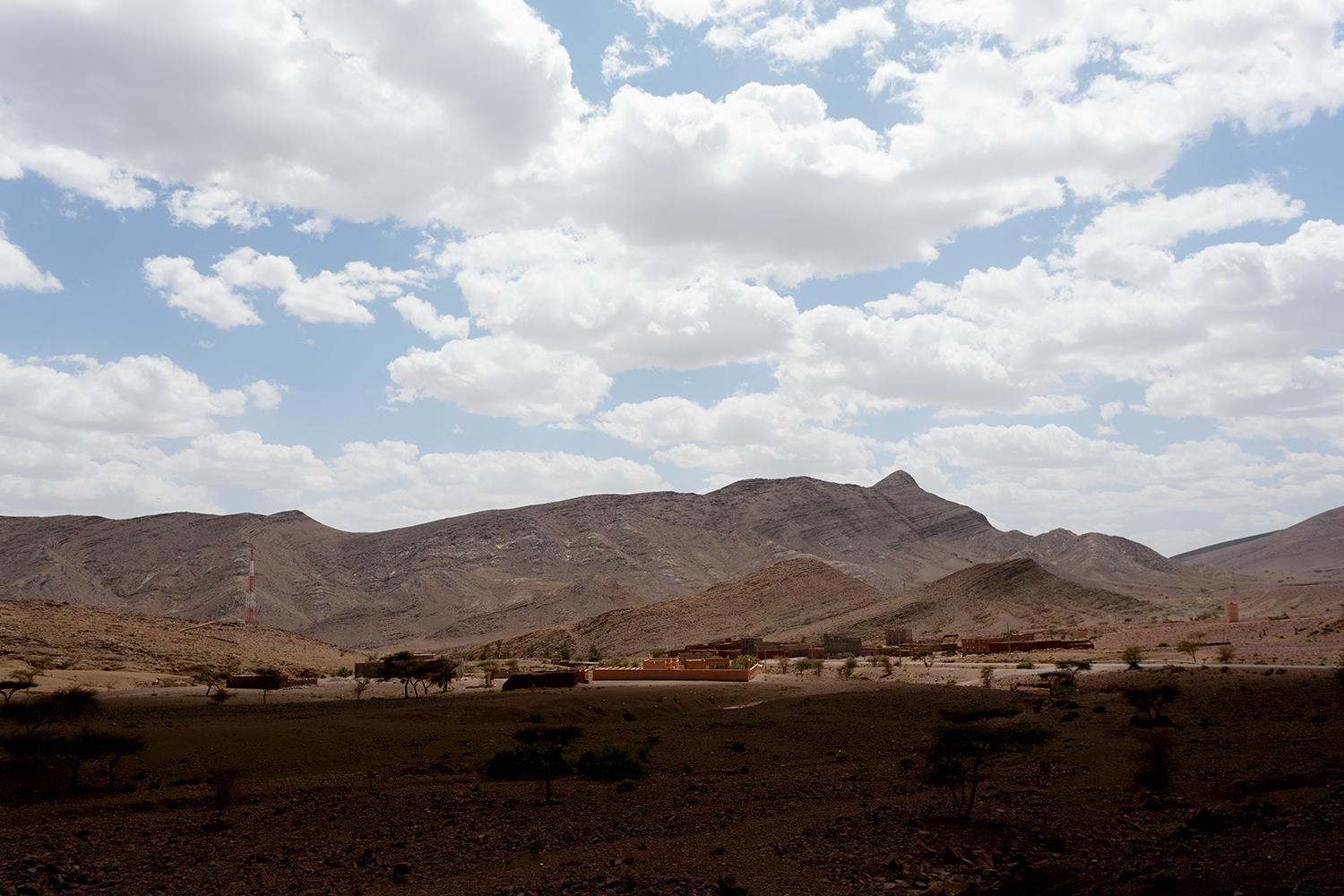 Despite the length of the journey (it ended up being around 10 hours there and 11 hours back), the drive was actually quite easy. I had to stretch my legs a few times, and we did a few stops at petrol stations for fuel and caffeine, but really the only difficult bit was when we were returning to Marrakech. We hit rush hour traffic, and navigating the aforementioned clusterfuck of animals, vehicles, and pedestrians was pretty tough after having been on the road for 10 hours already. (The road was technically two lanes, but it was more like four or five once you factored in the middle, curb, and verge.) The drive through the Atlas Mountains, after the orange aridness of Marrakech, was truly beautiful. Summer flowers, thick grass, verdant dells and groves densely packed with trees — due to the more temperate climate and the various tributaries that run down from the mountains, it’s really, really lush. The arid desert stretch from Ourazazate to Merzouga was less interesting in a flora-and-fauna sense, but the terrain — low-rise mountains mixed with flat plains — was fun to drive through.

We didn’t see a whole lot of sand until we got near to Merzouga. For the last half hour or so, we were basically surrounded by beautiful, pure, blindingly bright sand. Then, as we got really close to our destination, the massive sand dune of Erg Chebbi appeared on the horizon. Morocco has two Saharan sand dunes, Erg Chebbi and Erg Chigaga, formed from wind-blown sand from the Sahara desert (which technically begins a few hundred miles to the east, in Algeria). I’ll confirm this right now: In the sun, with a clear and contrasting blue sky, Saharan sand really is as orange as the photos make it out to be. (It was less orange when I was picking it out of my navel a week later, back in England.) 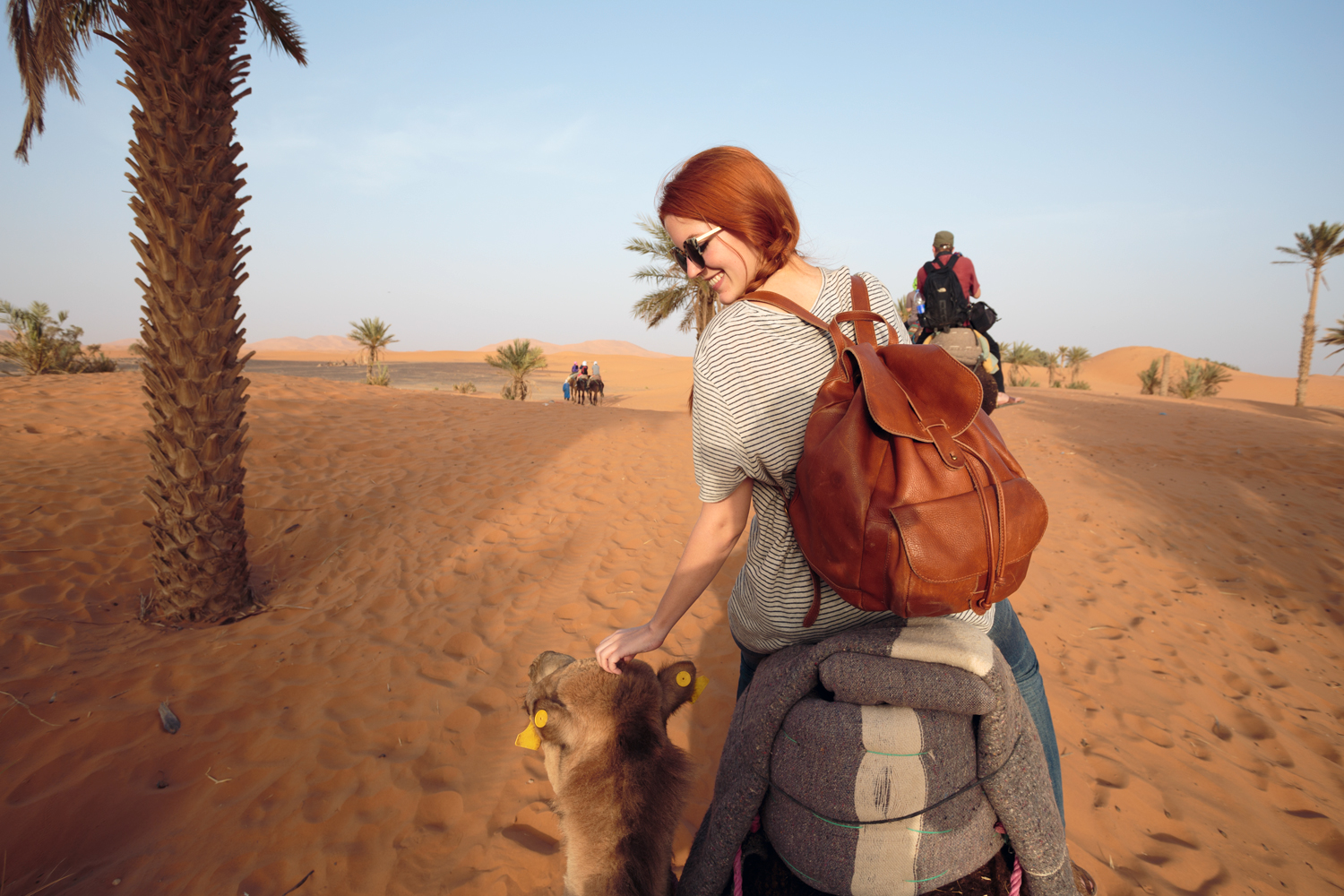 Shannon on Shirley the camel, in Merzouga, riding out onto Erg Chebbi

By this point, around 6pm, the sun was already starting to descend into the western sky. I stared into the sun and sighed, reflecting on the fact that I’d just driven 10 hours, and tomorrow morning I would be driving back. But then I looked at the dunes, our caravan of camels and cerulean cloaked Berber guides, and my female companion who looked beautiful and eager in equal parts, and smiled. It was time for us to do something we’d always dreamed of: Trek out onto a sand dune on a camel (the single greatest (and most fucking painful) argument against creationism and intelligent design) and spend a night under the stars in the Sahara desert.

Part two: Sitting painfully on the shoulders of dromedaries

Morocco: Sitting painfully on the shoulders of dromedaries

Welcome back
Morocco: Sitting painfully on the shoulders of dromedaries