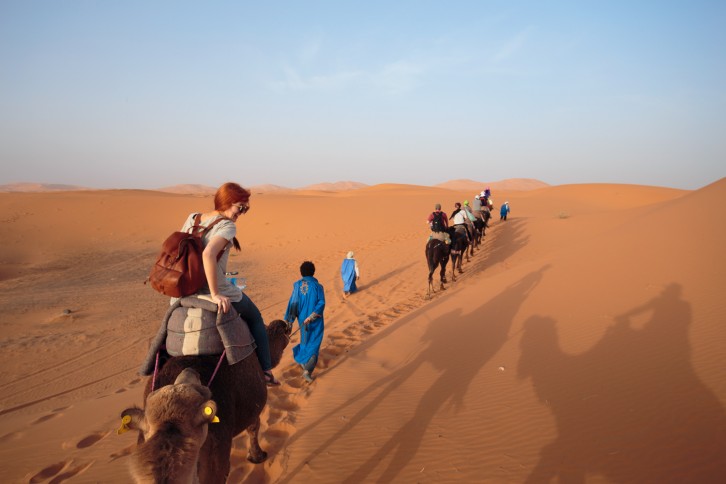 Morocco: Sitting painfully on the shoulders of dromedaries

Mounting a camel is exciting. Dismounting a camel is dangerous. Riding a camel… well, riding a camel is like riding a roller coaster that has had its safety harness removed and its uncomfortable comfortable seats ripped out in favor of a hulking, strangely muscular, smelly beast that is less comfortable to sit on than Weird Uncle Jim’s knee. I don’t know if it was because I was tall, or because my camel (which Shannon had named Douglas) had eight extra knees that his friends lacked, but the hour-long ride out onto Erg Chebbi was probably the most painful thing I’ve ever had to endure. (I should probably tell you that the most painful thing that had ever happened to me before camel riding was scraping my knee after falling off a bike. I have had a pretty easy life.)

Other than the camel, though, the trip out into the Sahara desert was wonderful. The blue-slowly-fading-to-mauve skies as the sun set. The orange sand. The rolling dunes. The weirdly soothing lurching motion of the camel as every one of its thousands of steps sunk randomly and haphazardly into the sand. (OK, that last one was a lie.) Probably the most interesting part of the ride for me, though, was our Berber guides. The Berber people are indigenous to North Africa, and due to the huge number of cultures that have invaded or colonized it, the modern-day Berber ethnicity is very loosely classified. In any case, though, our Berber guides were the type who speak a Berber language (there are many, depending on which group of Berbers you’re looking at), and who wear beautiful blue robes while walking endlessly through the desert with a camel caravan. 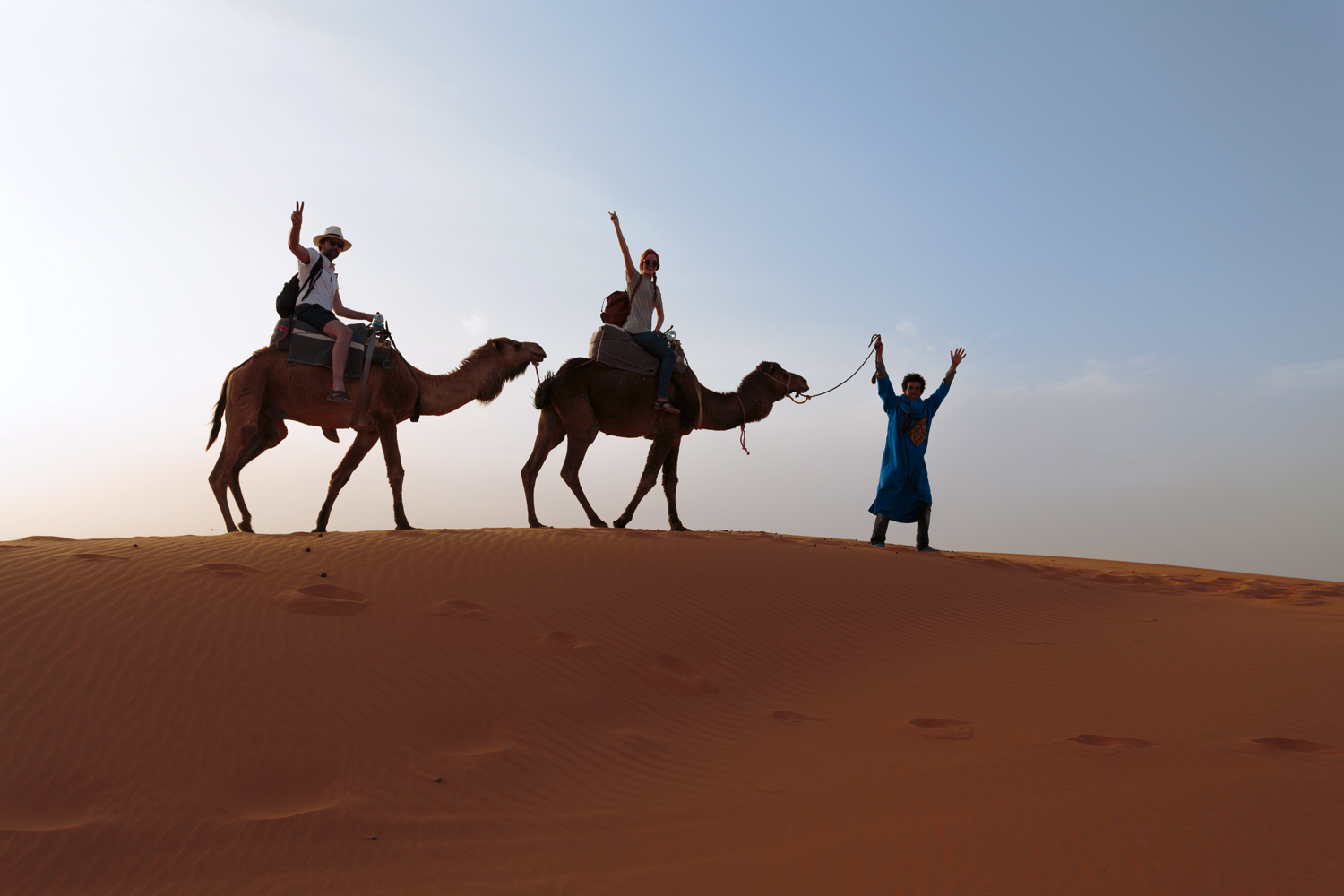 Seb and Shannon, sitting on Douglas and Shirly, on Erg Chebbi with our Berber guide

It’s stupid, but sadly I don’t remember the names of our Berber guides, even though we conversed quite a lot (in broken English; the national languages of Morocco are Arabic and Berber, with French generally acting as the lingua franca that connects the two). One of the Berbers, who was old, lacked most of his teeth, and couldn’t speak a word of English, appeared to be the comic of the group. Or maybe I misread the situation entirely, his lack of teeth merely giving the impression that he was always smiling. In the photo at the top of the story, you can see the Berber guide who led our two camels, Douglas and Shirley.

After 40 minutes or so, we spotted a lookout on top of a large dune — another Berber who had been readying the camp for our arrival that night. He waved and quickly disappeared out of sight, presumably sliding down the dune at high speed to light any fires and give the camel-hair mattresses one last coat of back-destroying concrete. A few minutes later, after working our way around the dune, we slowly descended towards the camp. 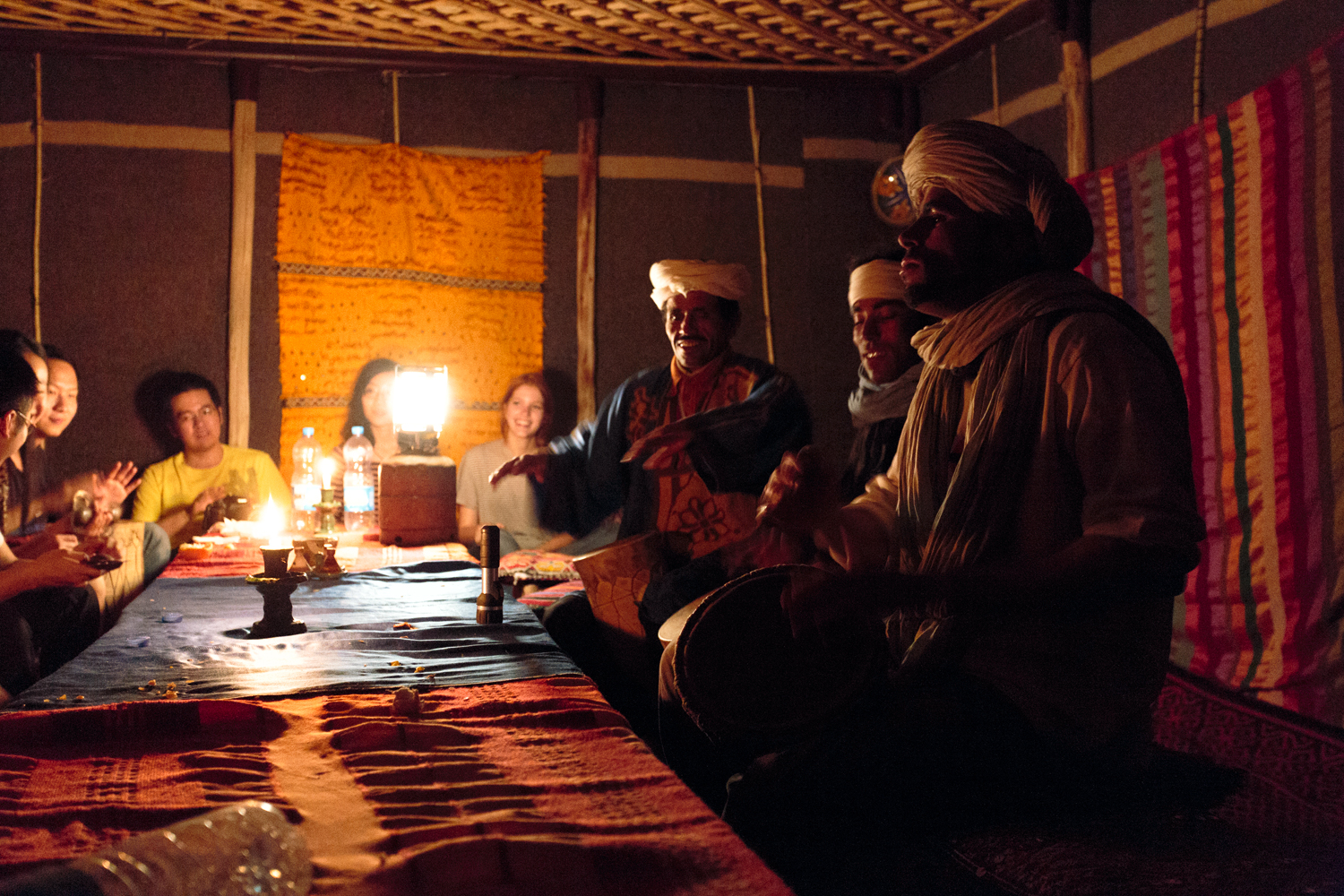 We listened to the Berbers make music. Two of the drums were passed around around the tent, and everyone clapped along.

The Berber camp was really cool, consisting of a few sleeping tents and a main social tent around a central sandy courtyard with a fire in the middle. There were about 12 tourists in total, with two double “beds” per tent (separated by a material divider). The Berber guides invited us to try sandboarding down one of the smaller nearby dunes. Only one of us actually managed to make it down to the bottom without falling over; most of us fell over within a couple of seconds. Of course, instead of falling gracefully on my ass, I fell on my face.

The social tent, where we spent most of the evening, had a long table and walls covered in bright swaths of (presumably) Berber cloth. Dinner was a lovely tajine, filled with chicken and rice and vegetables. I spent most of dinner learning about the other tourists. A lot of them were students from the US. Most of them were doing a multi-night stay in and around Merzouga. None of them were insane (bold?) enough to do Marrakech to Merzouga and back again in under two days. I’m quite proud of that.

After dinner, we made sweet music for a couple of hours. A few of our Berber guides picked up drums, a tambourine, and some maracas, and what can only be described as World Tribal Nomadic Percussive music quickly issued forth. After a while, the drums were passed around, and we all had a go at being musical. I like to think I was pretty good. I’m sure I would’ve been better if there was alcohol, but these Berbers were Muslim, and so I just had to shut my eyes and try my best to feel the beat of the desert. 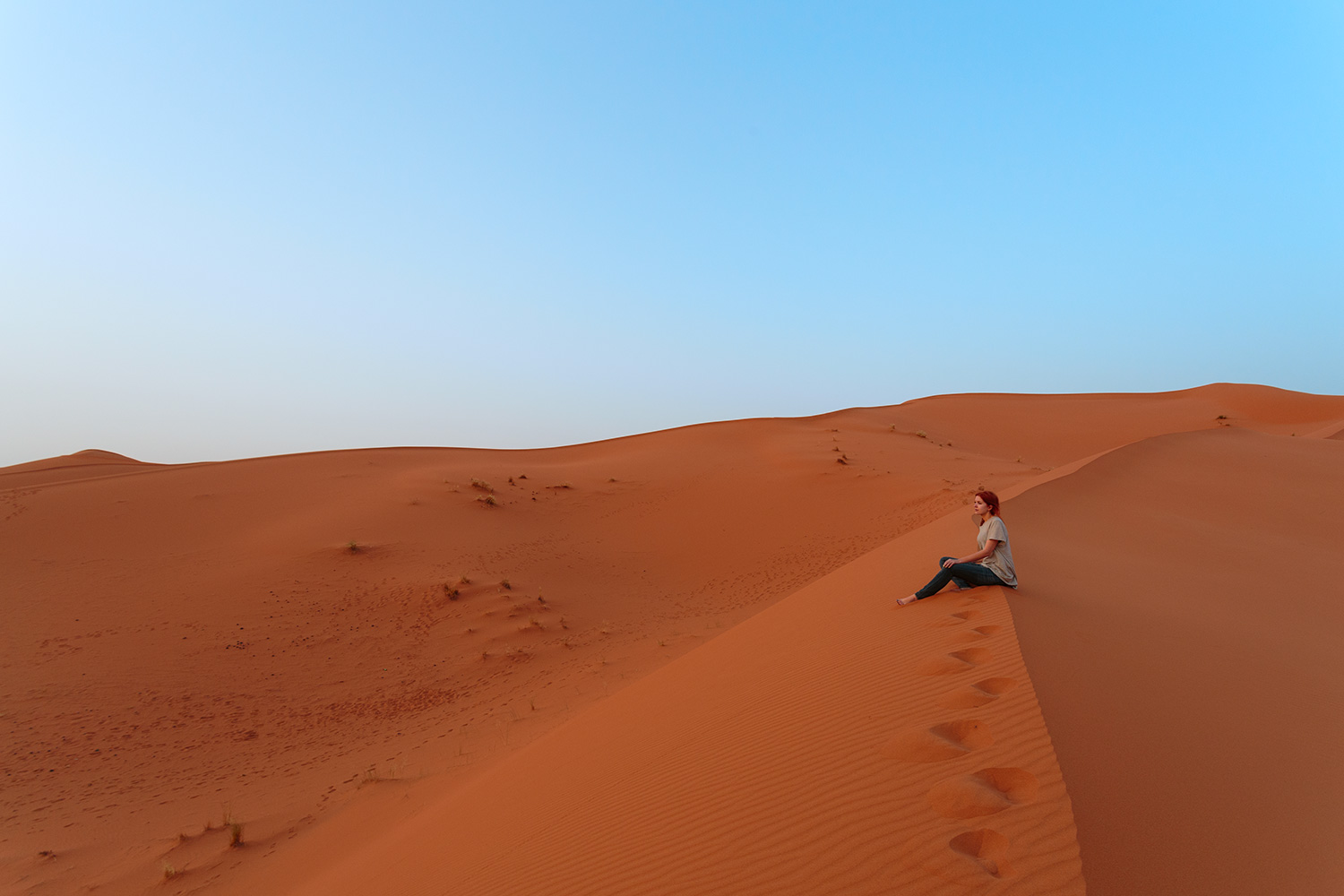 Shannon on a sand dune, practicing her Carl Sagan face

Afterward, Shannon and I walked up the big sand dune (which I’m sure there’s a good technique for, but I didn’t manage to work it out; instead I opted for the scrambling-upwards-faster-than-gravity-can-pull-me-back method), hoping to get a good look at the stars. It’s a long story that I won’t get into right now, but I had been planning to ask Shannon to be my girlfriend in the Sahara desert. The original plan was to ask her on the camels (it seemed fittingly ludicrous, given our relationship thus far), but the right moment never occurred. Failing that, the plan was to ask her out while we sat on a sand dune under the Milky Way in the Sahara. Pretty romantic, right?

Well, as chance would have it, just as I was drumming up the courage to do it, the winds picked up and started pelting us rather painfully with sand. She wanted to return to camp, but worried that I wouldn’t have another chance, I asked her to stay a little longer until the winds died down. Alas, she was having none of it, and started to run down the dune. To this day, I wonder if things would’ve unfurled differently if I’d managed to ask her out in Morocco. It would’ve been a romantic story to tell the kids, at the very least. Instead, our prospective kids will get to hear a much longer, juicier, dramatic saga full of plot twists and turns that even I, a writer, couldn’t have conceived.

Morocco: Marrakech to Merzouga and back again, by camel, car, and caffeine
I am leaving ExtremeTech